The impact of the accumulation of brain beta-amyloid and tau with ageing on the development of Alzheimer’s disease in Down’s syndrome adults: a cross-sectional and longitudinal study

Researchers at the University of Cambridge are tracking the development of Alzheimer’s disease in a group of people with Down’s syndrome to reveal important insights into the disease.

There are an estimated 60,000 people across the UK with Down’s syndrome and more than 60% will develop Alzheimer’s before the age of 60.

Understanding why and how Alzheimer’s develops in this group of people could not only help people with Down’s syndrome, but everyone affected by Alzheimer’s.

Our genetic information is stored in 23 pairs of genetic units called chromosomes that can each contain hundreds, or even thousands, of genes.

People with Down’s syndrome have an extra copy of chromosome 21, meaning that they can get some extra copies of the genes kept on this chromosome.

One of the genes on chromosome 21 codes for the Amyloid Precursor Protein (APP), which produces a protein called amyloid.

A build-up of amyloid in the brain is one of the hallmark features of Alzheimer’s and researchers think this is the link between the two conditions.

This innovative brain imaging project is using the latest brain scanning technology to track the development of early Alzheimer’s changes in a group of people with Down’s syndrome.

The team has already conducted a small study looking at amyloid levels in the brains of people with Down’s syndrome, and now this funding is helping them to extend their work to visualise more changes in the brain and track these changes over time.

The findings from this study will reveal vital insights about the course of the disease and how it can be tracked, paving the way for pioneering prevention trials that could transform the field of Alzheimer’s research.

Why is this important?

This study is helping researchers to understand more about the build-up of amyloid and tau – two key proteins that go awry in Alzheimer’s.

They will share this new knowledge about when these proteins start to build up in the brain and the impact this has on brain function within the research community, adding to the growing research in this area.

As people with Down’s syndrome are at such an increased risk of developing Alzheimer’s, they provide a unique insight into the disease and, in future, will be an important group of people to trial new treatment and prevention approaches.

However, before that can take place, researchers need to better understand how Alzheimer’s develops in people with Down’s syndrome, and highlight the best window of opportunity for testing new treatments.

New medicines are entering development that aim to attack the damaging processes underlying Alzheimer’s, but they need to be tested in the right people at the right time to have the best chance of success – getting this timing right is absolutely crucial for bringing new treatments to the clinic.

What will they do?

This unique project is using state-of-the-art brain scanning to track the development of Alzheimer’s in a group of people with Down’s syndrome, uncovering when the disease starts and how it progresses.

Recent advances in a form of brain imaging – PET scanning – now allows researchers to visualise the early build-up of the hallmark Alzheimer’s proteins amyloid and tau in the brain.

The team is also using MRI scanning to look for changes in brain structure.

By comparing changes in brain structure to levels of amyloid and tau in the brain, the team can extend their current work and build a picture of what’s happening in the brain over time.

The team can also study how these changes correlate with the start of Alzheimer’s symptoms such as memory loss, confusion and personality change. 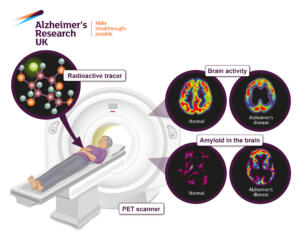 The findings from this study have the potential to shed light on a critical period in the disease for preventative treatment in people with Down’s syndrome, as well as providing insight that could benefit people with Alzheimer’s disease in the wider population too. Clinical trials of new medicines in people with Down’s syndrome are likely to pave the way for more widespread clinical testing in the Alzheimer’s population as a whole.

Take a look at our blog to find out more information about Down's syndrome and dementia.