Mum-of-three Rebecca Edwards is dedicating her spare time to volunteering for the UK’s leading dementia research charity in memory of her dad who died last year, aged 63.

Rebecca first started supporting Alzheimer’s Research UK shortly after her dad, Jeff, was diagnosed with early-onset Alzheimer’s disease at the age of 60. The diagnosis came seve 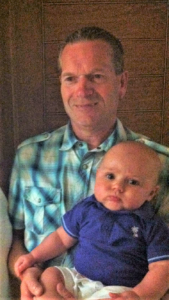 ral years after he first started showing symptoms in his mid-50s.

She said: “At first we started to notice weird little changes – Dad would babysit my eldest son, who was a baby at the time. He would keep him up late in the evenings and try to feed him solid food.

“After a while the problems became more apparent, but it was difficult to get Dad to go to the doctors. We finally managed to get him to go when he was 60 and following a memory test and subsequent brain scans he was diagnosed with early-onset Alzheimer’s.”

Rebecca, who lives in Newport, explained that she was expecting the diagnosis after seeing one of her aunties and two of her uncles, her dad’s siblings, receive a diagnosis of Alzheimer’s disease. However, their diagnosis came when they were in their late 60s, much later than her dad, who is the youngest of 11. Another of Rebecca’s uncles has since been diagnosed with Alzheimer’s disease. 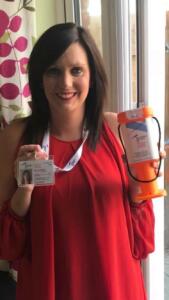 The 31-year-old mum added: “Dad had already retired when he was diagnosed but was working as a part-time taxi driver for my auntie and uncle. He had to give this up after a while because he would get lost doing journeys he had driven for years. He also wasn’t eating properly and when he moved into a different house he went drastically downhill.

“He ended up moving into an in home care  and was in there a year before he died last Christmas. He was only 63.”

Watching her dad and several other family members deteriorate and sadly pass away from Alzheimer’s disease has made Rebecca more determined than ever to support dementia research and as a result she has now become Alzheimer’s Research UK’s first collection tin co-ordinator in Wales.

This support builds on the thousands of pounds she has already raised for Alzheimer’s Research UK by doing a skydive, 5km run and by hosting a Mighty Quiz, the charity’s quiz with a difference.

Ceri Smith, Fundraising Officer for Wales, said: “Rebecca’s story is sadly not uncommon and so we are delighted to have her on board to help us in the fightback against dementia.

“She is passionate about making a difference and supporting dementia research with both fundraising and volunteering and her role will not only raise vital funds but also help us to raise awareness in Wales.

“If you have been inspired by Rebecca’s story and would like to join the Alzheimer’s Research UK volunteering team in Wales please get in touch.”

To find out more about volunteering opportunities in Wales or if you would like a collection tin for your workplace or business contact Ceri at ceri.smith@alzheimersresearchuk.org or call 07500 602675.