The UK’s leading dementia research charity Alzheimer’s Research UK has today pledged to commit a landmark £250m to dementia research by 2025, calling on the public to stand with them to make this ambition possible. The announcement comes ahead of World Alzheimer’s Day (21 September) as the charity launches a thought-provoking new campaign and awareness film to challenge hopelessness that still exists around dementia and enable pioneering research breakthroughs to happen more quickly. The charity wants people to understand that dementia is caused by diseases, and through research, diseases can be cured.

In 2017, dementia – most commonly caused by Alzheimer’s disease – became the UK’s leading cause of death. Despite this, new statistics from Alzheimer’s Research UK show that more than 1 in 5 (22%) adults in the UK mistakenly believes that dementia is an inevitable part of getting older and only half (51%) agree that it is a cause of death*.

The charity’s Make Breakthroughs Possible campaign is launching with a thought-provoking new film voiced by Game of Thrones actress Lena Headey and directed by award-winning Director Aoife McArdle – whose Paralympics advert for Toyota turned heads at the Super Bowl this year. The film for Alzheimer’s Research UK, premiering in full tonight in a special ITV Introduces break during Emmerdale, challenges audiences with thought-provoking visuals of a baby, which acts as a powerful metaphor for mankind’s innate survival instinct.

The film sends the hopeful message that, in the same way this instinct has led us to overcome many of our most intractable diseases, through research we can make similar life-changing breakthroughs possible for the diseases that cause dementia.

“We know that while awareness of dementia as a serious condition is increasing, more still needs to be done to help people understand the diseases that drive it and the potential of research to overcome them”, says Hilary Evans, Chief Executive of Alzheimer’s Research UK.

“In the same way medical research has overcome other diseases in the past, we can make the same breakthroughs for people affected by dementia and their families. Today, Alzheimer’s Research UK has laid out an ambition to spearhead the largest ever charity investment in dementia research over the next seven years. With the support of the public, we aim to commit a further £250m to fund life-changing dementia research by 2025 and we hope the film will inspire people to join us in making this ambition possible.”

“Our thought-provoking film represents the innate human instinct that compels us to survive and to help others survive. As a society, we have already overcome so many challenges, including developing life-changing treatments for some of the world’s deadliest diseases. Alzheimer’s and other dementias are now one of society’s biggest medical challenges, but overcoming them isn’t impossible.”

Dr Helen Beaumont is a dementia researcher at the University of Manchester who took up a career in research after losing her husband Clive to frontotemporal dementia at the age of just 51.

“After we got the diagnosis, it was pretty much a case of ‘he has dementia, there’s no treatment, there’s nothing more we can do’. At that point he’d lost his job, spent 18 months out of work and we had two children under the age of five.

“I think a lot of people still think dementia is something that happens to everybody as you get old and I wish we could stop that, because it isn’t.  When I was offered the opportunity to do research into dementia, I jumped at it. I lost my husband to dementia and I live in hope that I shall be able to stop that happening to other people.

“There is so much work happening, but to accelerate progress we n 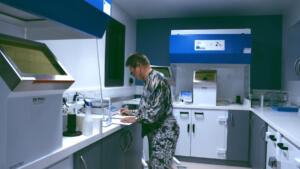 The £250m ambition from Alzheimer’s Research UK will see the charity continue to support ongoing efforts at the UK Dementia Research Institute and its own network of Drug Discovery Institutes, as well as leading the development of a global platform to support much earlier diagnosis of diseases like Alzheimer’s and developing new initiatives to bolster later-stage drug discovery efforts.

In the coming weeks, the charity will also set out an action plan for government to address the inequality of funding for dementia research and speed up the search for treatments.

“If we’re to make truly life-changing breakthroughs possible for people with dementia,” says Hilary Evans, “we must see society as a whole step up and drive change, from the public sharing a message of hope and supporting research, to government and policymakers creating an environment where pioneering science can thrive.”

To find out more, visit www.alzheimersresearchuk.org/makepossible