A Shropshire woman has been made a Champion of Alzheimer’s Research UK in recognition of her fundraising and work to raise awareness of dementia. 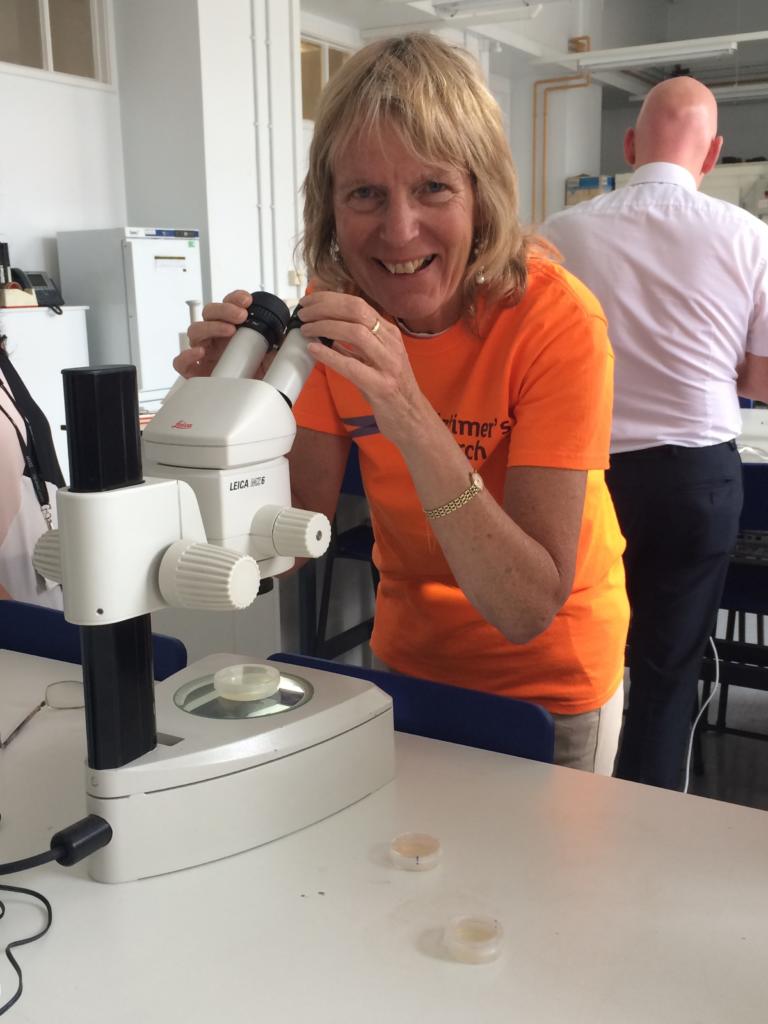 The London-born 66-year-old, who worked as a heritage, tourism and marketing consultant until she retired at the end of 2016 and was also previously Head of Marketing & PR at the Ironbridge Gorge Museum, has been a supporter of the charity for a decade.

She was inspired to support dementia research as her father, Tim Mahoney, who had been a prisoner of war for five years after being captured in the defence of Dunkirk in 1940, died with Alzheimer’s disease.

Katie, who lives in Newport, is also a prominent spokesperson for the charity in her role as a media volunteer and community speaker, sharing her personal experience to inspire others to get involved, raise awareness of dementia and promote research.

“I was both thrilled and amazed when I was told I had been chosen to be an Alzheimer’s Research UK Champion.

“I do whatever I can to raise funds for the charity – in fact most friends and family must by now be word perfect on the sad statistics I’m always telling them about dementia! But what I do doesn’t really strike me as being exceptional.

“Shropshire people are incredibly generous. The work our group does is only possible because of the really hard work of my colleagues and the good will of so many Shropshire businesses, networks and kind individuals. So it’s really down to that.

“It was heart-breaking to watch him fade away. A man who used to love chess, difficult crosswords, music and dance, and adored his granddaughters, gradually disappeared to the point where he thought he was back in the prisoner of war camp.

“Having seen my father as well as my parents’ friends cope with dementia, I knew I wanted to support Alzheimer’s Research UK. Dementia is one of few conditions that takes away someone’s personality and changes who they are.

“I’m proud to raise money for this great cause and help future generations who, with this research, hopefully won’t have to watch a much-loved relative or friend disappear in front of them as dementia takes hold.”

Katie joins a group of around 50 people who have been made Champions in recent years in recognition of their efforts in both fundraising and raising awareness on behalf of Alzheimer’s Research UK.

“Katie has been a tireless supporter of Alzheimer’s Research UK, playing a key role in the remarkable success of the Shropshire Fundraising Group as well as helping to promote the charity and raise awareness of dementia.

“There are 850,000 people in the UK living with dementia. Research has the power to defeat dementia and Alzheimer’s Research UK is leading the charge. We rely on public donations to fund our crucial research and it’s thanks to the commitment of people like Katie that we are able to increase the profile of dementia research and continue our vital work.”

To register your interest in joining the Shropshire fundraising group fill in the form at www.alzheimersresearchuk.org/volunteering/alzheimers-research-uk-regional-groups

For more information about volunteering for Alzheimer’s Research UK, contact Zoe Baggott, Regional Fundraising Officer for the West Midlands, on 07469 852501 or email zoe.baggott@alzheimersresearchuk.org