Chris and Hilary are both living in a care home, but even dementia can’t keep them apart.

Chris Warren, 72, and his wife Hilary Warren, 69, are still head over heels in love after 50 years, despite not always being able to remember who each other are.

Chris and Hilary’s love story is reminiscent of the hit 2004 film, The Notebook, starring Ryan Gosling and Rachel McAdams.

In the movie, the character, Noah Calhoun, tells his wife Allie Hamilton, who is living with dementia, the story of their relationship so she can ‘come back’ to him. 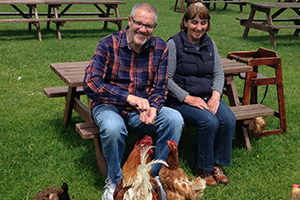 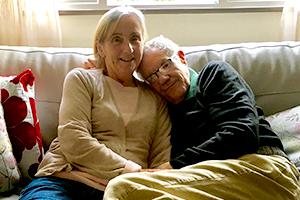 Chris and Hilary share a room at their care home in Broadstone, Dorset, following a diagnosis of dementia within just two years of one another.

Hilary’s vascular dementia is so severe she rarely recognises her husband Chris, who has Alzheimer’s disease.

But despite the cruel condition causing her to forget who her husband is, she still holds his hand and spends all her time with him in what her son says is an “unwavering familiarity” with her “soul mate”.

The couple’s son James Warren, who works as a Regional Fundraising Officer for Alzheimer’s Research UK, has decided to share his family’s touching story in a bid to raise awareness of dementia and the desperate need for research.

Donate in Chris and Hilary’s honour

A message from James: 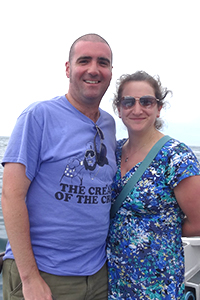 “My mum and dad are soul mates, without a doubt. My parents did everything for my two sisters and me and put themselves second, they were a team.

“These were the years that Ma and Pa were supposed to be able to relax and enjoy the fruits of their labours. They should have been travelling, enjoying being grandparents, visiting family and friends. Instead, they are both in a care home.

“They’ve both gone downhill a lot in the past year. Trying to get a smile out of my dad these days is incredibly difficult, the only time he really smiles is when he’s with Mum.

“Mum constantly asks where my dad is, even if he’s standing next to her, and she won’t always recognise that that’s him. But there is a constant familiarity there, even if she doesn’t know it’s really him she’ll hold his hand and rest her head on his shoulder.

“As time goes on they will have to have separate bedrooms, and will forget who each other are altogether. This breaks my heart, but I know that somewhere inside them they’ll always remember their love for one another.

“I want to raise as much awareness as I can for the great work that Alzheimer’s Research UK do. I long for the day no family has to know the word dementia. Please donate today so we can fight against this horrible condition that rips families apart.”

Hear more about Chris and Hilary in our in depth blog.

Give in Chris and Hilary's honour

If you've been moved to donate to help fund vital dementia research you can donate online. Click the on the button below.

A husband and wife with dementia are still head over heels in love after 50 years, despite not always being able to remember who each other are.