What dementia means for ethnic minorities in the UK

There are approximately 850,000 people living with dementia in the UK, 15,000 of whom come from black, Asian and minority ethnic (BAME) communities. The latter statistic is concerning because many of the people from BAME groups living with dementia will receive no support or will be diagnosed too late for symptomatic treatments to help. There are several reasons for this.

Historically dementia is misunderstood and highly stigmatised in many BAME communities.

Communicating what dementia is to BAME groups has also been challenging. This challenge is now being tackled by Alzheimer’s Research UK.  This week the charity is launching its ‘Quick guide to dementia’ leaflets in five new languages: Arabic, Bengali, Urdu, Gujarati and Punjabi. These guides will sit alongside those currently available in English, Welsh and Polish. They will go some way towards reaching BAME groups and increasing the ease of access to dementia information in the BAME community, something I welcome.

Predominantly, within the BAME community, fewer referrals from GPs reach a psychiatrist or neurologist. This can result in misdiagnosis, inappropriate treatment and ultimately it can mean a greater need for families and society to step in to help. Another of the main reasons for lack of referrals from BAME groups is due to inadequate diagnostic assessments. The thinking and memory tests that are carried out in the GP clinic compare performance to the majority white British population norms. So, the lack of BAME norms on these tests is a huge hindrance in trying to reach a diagnosis of dementia in those people. 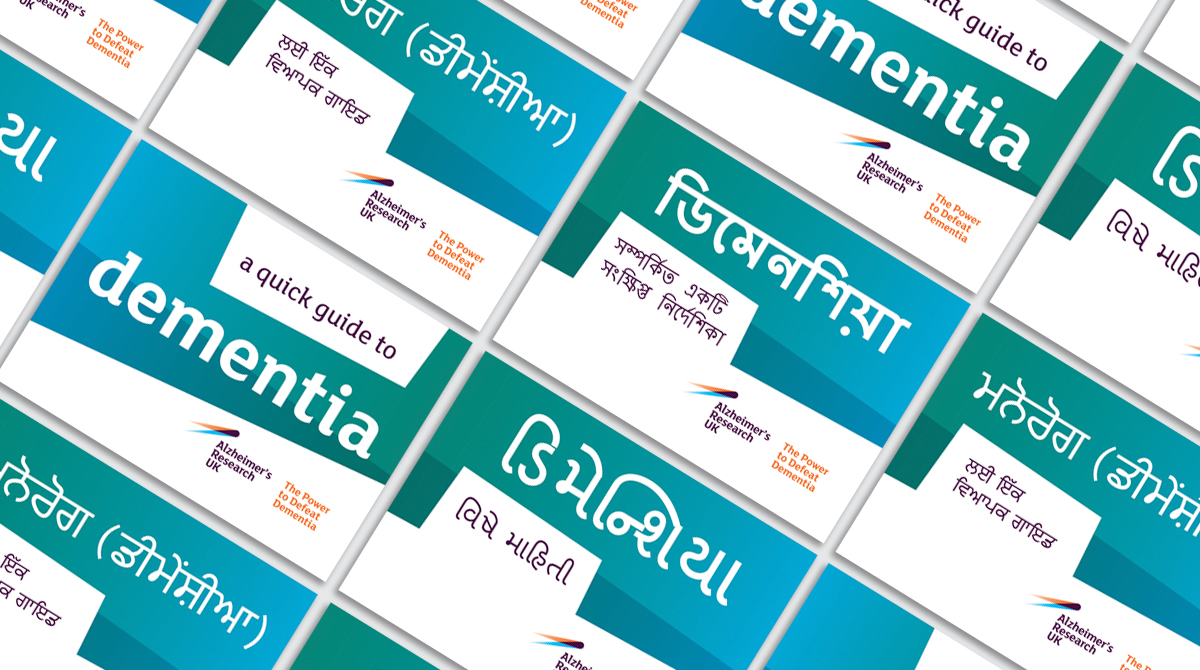 The Pakistani community is the largest under-studied ethnic minority group in the UK.

The Pakistani community is the largest under-studied ethnic minority group in the UK, especially in Yorkshire and this has been the prime focus of my PhD. The aim was to study cultural differences in certain screening tools that are used to confirm a diagnosis of dementia in memory clinics. I also looked at standardising memory and thinking tests, translated and modified into Urdu/Punjabi so that Pakistanis can be tested in their own language, hopefully aiding better diagnosis.

Many Pakistanis now over the age of 60 and considered an ‘at risk’ group do not have the capacity to complete memory and thinking testing in English. I aimed to collect lots of data on young and elderly volunteers across the Yorkshire area of Pakistani ethnicity in order to help with standardising these tests. However, I did encounter problems with this, especially due to the stigma associated with dementia. Speaking about dementia, or as it is directly translated into Urdu as ‘insanity’ or of ‘unsound-mind’, was not as well received as one would expect in the 21st century when the likes of meat-wearing fashion is deemed almost popular in the celebrity world!

Many Pakistanis, and the same could probably be said amongst other ethnic minorities, did take very well to the idea of someone from their own ethnic group approaching them, and this helped to attract more people from that community for my study.The research findings suggest that educational level, as well as age and cultural differences should be accounted for when testing Pakistanis with memory and thinking tests. This will give a better representation of the cognitive performance of these individuals than if we were to compare them to the general white British population.

My PhD was partially funded by Alzheimer’s Research UK for which I am forever grateful and it did mean that I could travel across the different locations with ease while collecting data on over 200 people.

There is a lot more however, that needs to be done not only to lessen the impact on families and society, but also to reduce some of the stigma that still prevails amongst ethnic minorities. Global leaders and organisations have aligned behind a shared goal to deliver life-changing treatments for dementia by 2025. However, in order for this to happen we must not overlook the challenges that BAME groups face, but rather aim to understand and appreciate the differences in what dementia means for ethnic minorities in the UK and on a global scale.

Order ‘A Quick Guide to Dementia’ in different languages, free from our website at www.alzheimersresearchuk.org/supporter-orders

Baber Malik did a degree in Psychology at the University of Hull, before moving to the University of Sheffield to study for a PhD in Neuroscience. He got involved in dementia research because he wanted to understand more about the brain and how psychological assessments can be used to learn more about the changes the condition causes. His research focuses on cross-cultural dementia research. Baber has benefited from funding from the Alzheimer’s Research UK Yorkshire Network to fund some of the studies in his PhD.