A study of the US healthcare system released yesterday says the current structure is insufficient to quickly deliver future treatments for people living with dementia. Although the US and UK health systems are inherently different, this review of the American system is a reminder of the need within our own health system to prepare for new treatments. It also reinforces calls for the UK to begin addressing similar concerns outlined in our report, Treatments of Tomorrow, published last autumn.

What the study says

The study, commissioned by US biotechnology company Biogen, looked at the capacity of the current US healthcare system to integrate new treatments. Biogen is one of several pharmaceutical companies developing potential new drugs for Alzheimer’s. While these treatments are still in clinical trials, the study looks ahead to what could happen if a future drug trial were successful.

The study says if a new treatment was ready by 2020, it could take more than two decades for someone to move from screening and diagnosis to receiving the new treatment under the current system.

Among the top roadblocks, the study lists a shortage of medical professionals and advanced scanners needed to diagnose potential patients as well as a lack of specialist infusion centres potentially needed to deliver treatments given via injection rather than via pills. The study concludes that without intervention a treatment could be “available but out of reach”.

Where do we stand today?

Since 2009, the number of clinical trials in the UK has nearly doubled as investment in dementia research and development has steadily increased. We are also better prepared to help find people to take part in these trials thanks to Join Dementia Research. Not all of these efforts will result in an effective treatment, but more trials in progress means the likelihood of a successful treatment is higher than ever before.

When the long-awaited next treatment proves to be effective for people with dementia, the health system needs to be prepared.

Under the current system, once a new treatment shown to be safe and effective in clinical trials, these are the steps it must go through before it can be delivered to patients:

Experts anticipate that it could take several years for a new treatment to be integrated into the NHS system after a successful clinical trial. That timeline could be up to three years longer if the treatment costs more than £20m, which would signal an additional review by NICE. 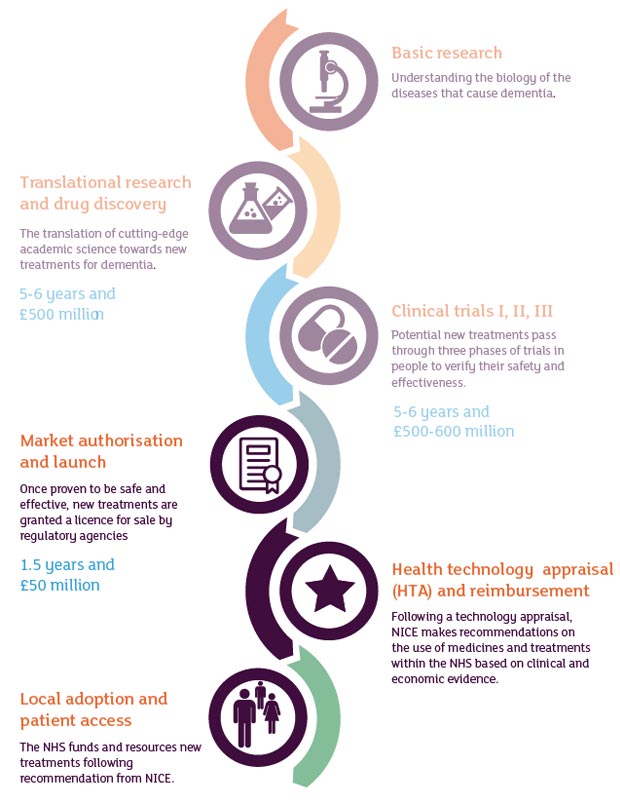 The recent announcement of an Accelerated Access Pathway within the NHS to help improve the time it takes to introduce innovative new treatments (called ‘breakthroughs’) is a welcome step forward. While the plan outlined is primarily positive, particularly in its ability to speed up access to treatments by almost four years, we still need to see more detail. It will be vital to understand how treatments will be classified as ‘breakthroughs’, and to establish how much emphasis is placed on cost-saving treatments, as opposed to those that might have significant benefit to patients, but not save much money for the NHS.

How Alzheimer’s Research UK is helping

Finding ways for people with dementia to access future treatments as quickly as possible is vital to our mission of bringing about the first life-changing treatment for dementia.

At Alzheimer’s Research UK we are actively working to help prepare for such a breakthrough, including pushing for cooperation between the many groups involved in the process. As progress is made in clinical trials, we need to see early dialogue between drug companies, people with dementia, charities and the NHS to consider the best way to overcome potential hurdles in bringing a treatment to patients.

Working collaboratively with people with dementia and their carers will be critical in making this pathway work for the dementia treatments of tomorrow, and over the coming year, we’ll be asking you to help us in this work.

What you can do

Big changes, like those discussed here, won’t happen overnight. We need your help to change policy and ensure people with dementia will benefit as quickly as possible from new treatments. You can be part of the discussion by learning more about our policy work or joining our team of Campaigners.