In 2012, Prof John Gurdon and Prof Shinya Yamanaka won the Nobel Prize for Medicine. Their pioneering work developed a technique to turn adult cells, such as those from the gut, into stem cells.  The next big challenge has been to use these stem cells to answer key medical questions, one of which being how nerve cells are damaged in Alzheimer’s disease. Today sees the launch of the Alzheimer’s Research UK Stem Cell Research Centre, a collaboration between the University of Cambridge and University College London, kindly supported by The Alborada Trust. The use of stem cells in research can be a controversial issue and there are common misconceptions about the methods used. In this blog, I will explain the use of stem cells in dementia research and how the Stem Cell Research Centre can bring us closer to finding treatments for dementia.

What are stem cells?

During development in the womb, an embryo is made up of a collection of stem cells. These stem cells can become any type of cell in the body, depending on the triggers they receive. For example, nerve cells, heart cells and bone cells can all be formed from the same original stem cell. As the embryo continues to develop, cells undergo a process called differentiation. This means that they become more specialised and can no longer become any cell in the body.

How do we get the stem cells?

As adults, we are fully developed and therefore no longer have many stem cells, only in specific parts of the body, like bone marrow and the gut. So scientists have to ‘make’ stem cells, using the groundbreaking methods that won Prof Gurdon and Yamanaka the Nobel Prize.

Biology is in a lot of ways like cooking.  Scientists follow ‘recipes’ to turn starting ingredients into something useful. Researchers at the Alzheimer’s Research UK Stem Cell Research Centre will take skin cells donated by people with Alzheimer’s and follow a ‘nerve cell recipe’. This will involve treating the skin cells so that they become less specialised and more like stem cells. Instead of only being able to become skin cells, these newly formed stem cells can be triggered to become nerve cells. Not bad for what started as a swab of skin cells!

Not only do these new nerve cells grow well in the lab, they behave in a similar way as they would in the brain, communicating together in networks. This is particularly important when studying Alzheimer’s as a lot of the symptoms of the disease are caused by damage to nerve cell communication. 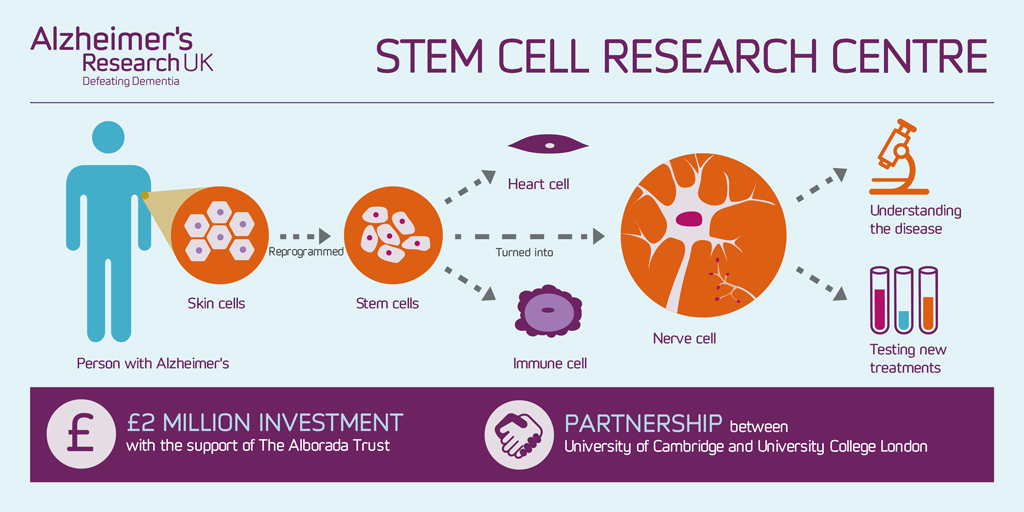 Why are stem cells useful in dementia research?

Researchers do not intend to implant these new nerve cells into the brains of people with Alzheimer’s, to repair the damage caused by the disease. Instead, scientists want to study how these nerve cells behave. Scientists can study, in a dish, the initial stages of the disease, hunting for clues about how nerve cell damage begins and how it can be halted.

The potential of stem cells isn’t only in understanding Alzheimer’s. Excitingly, these nerve cells can also be used to test potential treatments. Lots of different drugs can be tested on nerve cells to see whether the damage from Alzheimer’s can be stopped. This is not a substitute for testing drugs in clinical trials, but scientists hope that this technology will provide a way to see whether potential treatments might work, in experiments that are relevant to people with Alzheimer’s.

Stem cell research has many possibilities and we need initiatives like the Alzheimer’s Research UK Stem Cell Research Centre to bring together experts to work towards a common goal. We believe that funding this world-class research will bring us one step closer to our aim to defeat dementia.