We’re delighted to announce that Dr Rita Guerreiro from University College London is the first ever winner of the Alzheimer’s Research UK Young Investigator of the Year Award. The Award celebrates excellence in dementia research and recognises the huge impact of Dr Guerreiro’s work across the world. 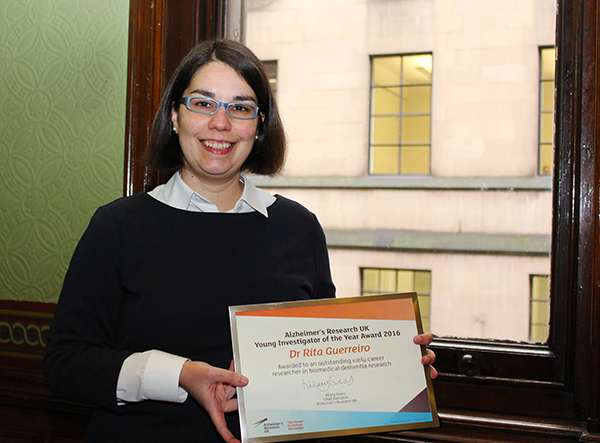 In 2012, Dr Guerreiro and an international team uncovered a new genetic risk factor for Alzheimer’s disease. The landmark discovery inspired the research community to intensify efforts to understand the role of the immune system in dementia. Through careful analysis of thousands of DNA samples, Dr Guerreiro revealed that faults in TREM2, a gene which plays a key role in regulating the brain’s immune response to damage, increase the risk of Alzheimer’s. You can read more about this breakthrough finding here.

I caught up with Rita ahead of today’s announcement, to learn more about her current work and hear about her passion for genetics.

What made you want to be a scientist?

I think it was the quest for knowledge, combined with the ability to help people. I love the scientific method; making observations, coming up with an idea to explain those observations and designing experiments to test your idea. I think this process can be applied not only in science, but across everyday life.

Some people think genetics is boring because there are no pretty pictures! But I like the fact it’s black and white, with very few grey areas. Genetics is central to understanding human life and disease. If you imagine Alzheimer’s disease as a jigsaw, genetics gives us the corner pieces – essential clues to solving the puzzle. When I first saw the Sanger DNA sequence (the first ever analysis of the entire human DNA code) and read the genes known to cause familial (or inherited) forms of Alzheimer’s, it was obvious that through studying genetics I could have a huge impact on the lives of families living with dementia.

Your genetic discovery has made a massive impact on the research field. How does that feel?

It never crossed my mind that our finding would be as big as it has been, but that’s what you work for – to find the first corner piece in the puzzle. It’s amazing that I was part of this discovery and to watch the impact it’s had on our understanding of dementia and drug development strategies. The ultimate hope is that it leads to treatments in the clinic sooner.

What are you currently researching?

My main goal is to find new genetic risk factors for Alzheimer’s and other dementias. I’m building on the types of experiments that led to the discovery of TREM2 and applying them to other rarer dementias. Rather than looking at the whole DNA sequence and hunting for differences between healthy people and those with dementia, I take my inspiration from people living with very rare diseases that cause dementia. I focus on the single genetic faults responsible for the rare disease and then see whether variations in that faulty gene also appear in people with more common forms of dementia. People with dementia are at the heart of the science I do and I have forged strong links with clinicians across the world.

What does winning the Young Investigator of the Year Award mean to you?

It’s an amazing honour, especially from a renowned charity like Alzheimer’s Research UK. The Award helps validate my hard work and shows I am on the right path. But it wasn’t just me – my work wouldn’t be possible without a huge group of people and I’d like to thank them all. Special thanks go to my husband as well as everyone in the lab and my mentor Prof John Hardy for his vision.

What’s your favourite part of being a dementia researcher?

I love all aspects of science – in Portuguese we would say I’m like ‘a fish in water’! I love being in the lab, the fast pace and the challenges. Those moments where you know something that no one else in the world does are addictive. It’s hard work, but the impact my work could one day have on people living with dementia is a huge privilege.

What do you do when you’re not in the lab?

My husband is also a geneticist and we work together, so there’s a lot of science chat outside of the lab! But I also enjoy swimming, hiking, watching TV and going to the cinema. Recently I’ve been doing a lot of cooking and baking – my grandmother was an excellent cook, so hopefully it’s in my genes!