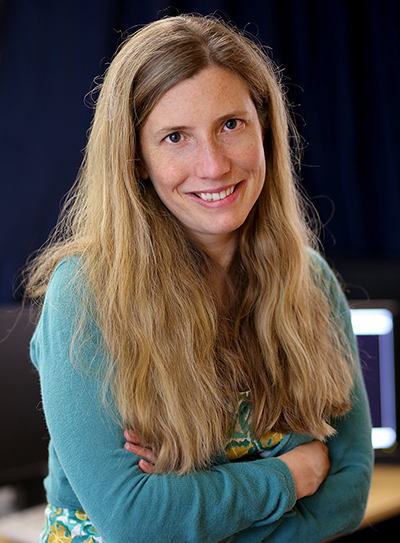 Dr Jo Barnes is an Alzheimer’s Research UK Senior Research Fellow. She is working to develop new brain imaging techniques that will diagnose dementia sooner. Her pioneering work is kindly supported by The Perfume Shop and Gucci’s Chime for Change Campaign.

How did you get into science?

I did an undergraduate degree in Natural Sciences at Cambridge but then went into science media. I worked in an independent television production company, then moved onto the Discovery Channel and then to the BBC, at Tomorrow’s World. I enjoyed the work there but really missed getting into the problems and being the one that was solving them. I strongly felt that I wanted to be the one doing the science.

I applied for a research assistant post in medical imaging at the Dementia Research Centre. This post allowed me to develop my own research interests. Part of the job was using the brain scanning technique called magnetic resonance imaging (MRI) to determine how well a clinical trial had worked. The brain shrinks in people with dementia and during trials for a new treatment we measure the brain volume of the volunteers to see whether the treatment can stop the brain from shrinking.

I was allowed to do my PhD part-time after a while in the job. I completed this within three years and was then awarded a research fellowship from Alzheimer’s Research UK. Following that I applied for the senior research fellowship, which is what I’m funded on at the moment.

What does your current research involve?

I’m using MRI to determine whether damage to the brain, often caused by problems with blood vessels can be seen in people with dementia. These scans allow you to see where parts of the brain may be vulnerable to this kind of damage. These vulnerable areas show up as bright white blobs and I am interested in seeing whether these blobs are related to the brain shrinkage seen in Alzheimer’s disease.

I’m also interested in the risk factors and events which occur throughout people’s lives. I particularly focus on the vascular system – that is, the network of blood vessels which goes throughout the body. People have a whole life before they get dementia and things that happen to them during life may put them at greater risk of developing dementia. This is important because detecting people who are at risk of being affected early means we can treat them early. We need to find the people who are most at risk.

We don’t want to just treat the whole population because we need to get drugs into the brain which alter the proteins there. You don’t want to do that in people who are unlikely to develop the disease. Drugs also all have side effects and costs associated with them.

Why is this area of research important? What hope does your work bring to people with dementia?

Ideally, early detection means early intervention. Ensuring vascular health is in part under people’s control – if you keep healthy, exercise and eat well, then your vascular health will be better. If we understand how problems with the vascular system can influence Alzheimer’s disease we can have an intervention which is not a drug – something that people can do to help themselves – a bit like we know eating fruit and vegetables reduces the chance of getting some cancers. It gives people a bit more control.

However, there’s still a long way to go to fully understand whether there’s an interaction between these things. We need to find out how our results relate to a wide population of people, which will take some time.

What do your PhD students do?

Emily is trying to extend our existing knowledge of MRI scans to get really good ways at looking at certain brain structures which are hard to assess using traditional MRI technology. Emily’s work will allow us to look more in detail at what we couldn’t see before. This will give us a better understanding of how these structures are affected by Alzheimer’s disease. Ultimately, her work may improve our tools for diagnosis and for evaluating new drugs for Alzheimer’s disease.

My other PhD student, Cassy, is working on the vascular aspects to allow us to answer the underlying biological questions about how the bright white blobs associate with both brain shrinkage and the accumulation of abnormal proteins found in Alzheimer’s disease. She will look at when and where in the brain these changes happen.

We are getting closer to understanding both the disease processes and predicting and giving more accurate prognoses for people. When the interventions arrive, we are now much better placed to find people who are more likely to benefit from treatments as well as those who can go into the drug trials. I’m genuinely hopeful that there will be an intervention for these conditions.

It’s a really exciting time to be in dementia research – there are a lot of challenges and questions to which we don’t know the answers. There’s lots to be understood. This means that people can really make a difference- not just to understand and further scientific knowledge, but to contribute towards treatments and interventions for people.

What advice would you give other women who want to get into science?

What I look forward to is the day that it’s not even an issue. When it’s not news that someone is senior and a woman. This is a problem which affects all areas, not just science.

I think the tricky thing for women in science is that planning families and things like that comes at the same time as needing to demonstrate independence as a scientist. It is possible but I think it’s too easy to worry about. 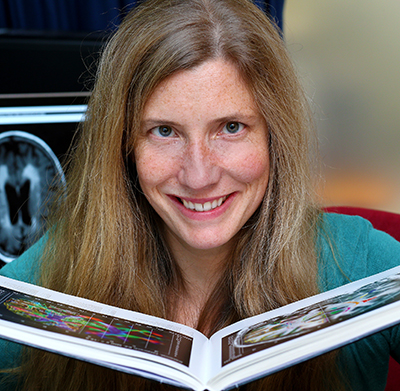 What’s really important is having a mentor and role models who can show you that it can be done. I try to be a role model if it’s helpful – I am a mentor to several people within the institution.

If I was giving advice to a 17 year old girl who was interested in becoming a scientist, I’d say be open minded about what you eventually want to do. A science degree can open many doors so even if you decide to not become a scientist you haven’t wasted your time. However, if you find an area of science that you really want to do, it can be incredibly fulfilling. It can be creative and emotional. There’s also elements such as management too which can be rewarding. Don’t think too far ahead – my opinion is that girls in particular tend to do this. Don’t think of taking a different path from that which you planned as failure.

Women have some responsibility to make themselves visible throughout their career. If we do that we are more likely to get equal opportunities.

What did your job at the BBC involve?

My job there was to research stories and write them up – work out how new the story was and to work out whether it was truly ground-breaking. Speaking to people who were experts in the field and asking their opinion and presenting this at editorial meetings to see if would be put forward to be made into a film. I also directed some films and wrote scripts for Tomorrow’s World Plus, a digital version of the programme. I enjoyed filming and meeting contributors.

What was your favourite project when you worked at the BBC?

We did a special programme about extracation of people from cars in accidents by firefighters where we went to South Africa. This was at the world firefighter’s games – it was so different from anything we’d done before. We looked at it from a patient point of view and an engineering point of view. This was my idea that I put forward and developed – I’m proud of it as a project.

You said that you missed lab work whilst working in media. Do you miss the media now?

I think communication is really important. I don’t miss it creatively as science is creative in its nature. I didn’t appreciate that during my degree – when you’re the person coming up with hypotheses and designing experiments to test and communicating your findings to a scientific audience. There’s a very creative element to performing science within the lab.

I tried to merge my love of art and science by working in the media but I found that I need to do both ‘actual’ science and ‘actual’ art. There is a lot of opportunity these days to merge the two if it served a good communication purpose – people can understand things through art that sometimes can’t be conveyed by talking on camera or writing it down. It can be a good way to communicate complex issues.

What do you do in your spare time/outside the lab?

I like to do some basic creativity out of the lab. I paint – oil painting normally. I used to do stained glass but found that with a toddler in the house it wasn’t the best idea! I do landscapes and animals.

I have a cat called Dave and a dog called Able. They get on surprisingly well. My husband is a vet – he tries not to bring home too many injured animals in case I want to keep them all!

What is your favourite fragrance/smell?

I like vanilla actually – raw vanilla as it’s not too sickly sweet. I like citrusy smells too.

Do you have any particularly strong fragrance memories?

I associate the smell of oil paints with relaxing and comfort as it’s my go-to hobby. I also like country smells – a lot of people understand that cut grass is a positive smell – especially early in the year – spring is here and it’s warm enough for the grass to grow and sunny enough for it to be cut.

Whatever I say it will get me chastised! … I think having pets is a massive thing.

My dog, Daisy, was a golden retriever who was the greediest dog in the world. She scoffed jellyfish on a beach and then subsequently brought them back up … along with packets of cat food which she’d also apparently eaten?! Another time, my mum brought some hot cross buns, zipped up in her bag. We were out of the room for a minute and a half. We came back in to find all the hot cross buns gone and a very happy dog with a swollen stomach!