Today is International Women’s Day, a global day celebrating the achievements of women in science, technology, engineering and maths. #adalovelaceday That includes the incredible female researchers helping to bring about the first life-changing treatments for dementia.

In our 2015 report, we spoke of women as a ‘marginalised majority’, because, for women, dementia presents a ‘triple whammy’. Not only are 65% of people living with dementia women, they are also more likely to end up as carers of friends and relatives with a form of dementia. In addition, women are more likely to leave science early in their careers meaning female talent isn’t being fully harnessed in research.

Alzheimer’s Research UK is passionate about championing our female scientists. We spoke with some of the incredible researchers we work with about dementia research, potential barriers and how we can support women in science. 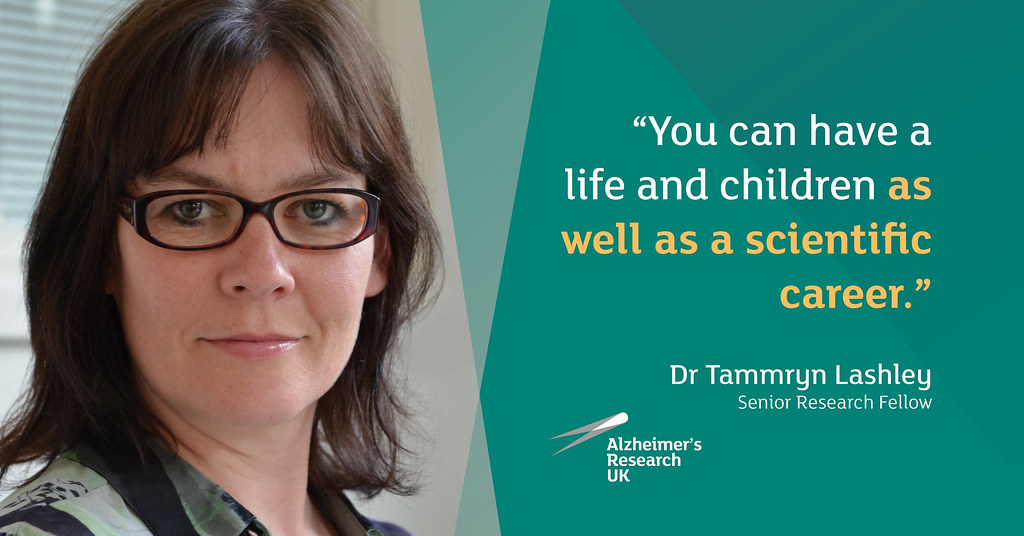 Understanding why senior research positions are still predominantly occupied by men is important, because we know that having diversity in a field boosts productivity and innovation. For example, authors of a recent study analysed 1.5 million research papers and found that if at least one author was female, the paper was more likely to include an analysis on gender and sex differences among research participants.

Ensuring we’re gaining perspectives and attitudes from scientists from all walks of life is important for research progress and something we want to champion through our position as the UK’s biggest dementia research funder.

Dr Jo Barnes: “As scientists we only approach a problem from a particular angle, and that angle is biased by our own experiences in life because we are human. And if we don’t have the diversity of people at the top who are asking specific questions… we only see a particular problem from a very narrow perspective and that can lead to incomplete answers and rather biased conclusions.”
Dr Carol Routledge: “We need women as their approaches, insight, and experiences mean they will view science and scientific findings differently. This can only be a good thing. It drives discussion and it drives novel thinking and novel ideas.”

An imbalance at the top

Looking around during my PhD, it was apparent to me that women disappear as you look up the research hierarchy. While at PhD level, there were slightly more women than men, male professors outnumbered female ones.

Unfortunately, my experience isn’t unique. When you look across all science disciplines and career stages, women make up just 38.1% of the UK community of researchers on average. Although there may be many reasons why, it’s clear that women are leaving the field before they progress into high ranking positions.

Cassy Fiford: “Like in many professions, there’s a gender imbalance at the top. The majority of my colleagues at early stages of their careers, PhD students and research assistants are women. It’s when you look higher up, towards the Professor level when the women gradually begin to disappear. Reversing this is no easy task. Both sexes must fight against biases in thinking which can favour male candidates or male progression towards the top of the field.”
Dr Jo Barnes: “There are really amazing women at all levels of science right from research assistant to professorial level. We all understand that the proportions change throughout the career path and there’s much less representation at those high levels. I think it’s also fair to say that there’s less diversity entirely at those high levels.”
Dr Tammaryn Lashley: “I also think we need to address the balance so that it’s also a good career for work life balance. It doesn’t have to be a nine to five job. You can work at home quite a lot of the time as well. I think that needs to be addressed, that we’re not here 24 hours a day slaving away in the lab. You can have a life and children as well as a scientific career.”
Prof Tara Spires-Jones:“Everyone faces barriers in a research career. The representation of women in the early career stages of my field is fantastic. However, this drops off as you raise through the ranks of academia with far fewer women professors than men.”
Dr Selina Wray: “There are only two explanations for [the lack of women at top levels], either women aren’t as good at science or there are barriers that are preventing them from reaching that level. To me, it seems quite obvious that it’s the latter because I don’t see women are any less good at science than men.”
Dr Carol Routledge: “There appears to be a difference between senior females in pharmaceutical environments versus academic environments with greater parity at the top of the profession in non-academic scientific roles. Whether this is by choice needs to be determined. It is not always easy at first glance to understand what the inequality is due to.”

The importance of role models

“I could do that” has to be one of the most motivating things we can tell ourselves, and it’s for this reason that having role models is so vital. Having high ranking women to look up to, whether in science or elsewhere, is pivotal for progress being made around gender equality.

I was lucky to learn from the more senior researchers who went before me. Their example taught me how important it was that women who have climbed toward the top don’t pull up the ladder behind them. Not only are these women providing inspiration to others, they are forging a path for others to follow.

Dr Selina Wray: “A really important factor in inspiring women in science is having visible role models, so [we need to have] women doing high profile jobs in science, so people can look at those women and think, ‘if she can do it so can I.’”
Prof Tara Spires-Jones: “Professor Anne Young [was a role model]. She was the first woman Chief of Neurology in the US and a fantastic, outspoken role model for women in science.”
Dr Tammaryn Lashley: “I think it is important for senior people to teach the younger generation how to succeed. I don’t mean show them, because everybody’s career paths are different. But to teach them resilience, how to get things done, how to keep going when everything you do is a failure (experiments/ papers/ grant applications).”
Dr Carol Routledge: “Professor Rita Levi-Montalcini was my role model. She was awarded the 1986 Nobel Prize in Physiology or Medicine jointly with Stanley Cohen for the discovery of nerve growth factor. Prof Levi-Montalcini was discouraged from going to college as it was deemed that this would be deleterious to her being a wife and a mother. Clearly, she took no notice!”

How we can support women in science

Through initiatives like flexible work hours, shared parental leave, equal pay, mentorship early in their careers, improving the representation of women in senior roles, and retaining talent and diversity in teams, organisations can provide a successful footing for the entire workforce.

Here at Alzheimer’s Research UK, all our funding schemes and grants are flexible, enabling people to tailor their funding to their needs, be it flexible hours, part-time working or even bringing children along to interviews. When we looked at the people applying to our grant schemes, we saw that while more men than women apply to us for research funding, the success rates are on par between men and women.

Prof Tara Spires-Jones: “If we want to keep these intelligent women in the field, we need to make the choice to stay in science an attractive career path with decent pay and stability.”
Dr Tammaryn Lashley: “I think several factors impact the imbalance [of women in science] and I think it will take several decades to correct the imbalance. What we can do now is make sure that we’re interviewing at all the levels the correct portion of male and female. But I guess at the end of the day it’s who’s right for the job. If it happens to be a male, it’s a male. If it’s female, it’s female.”
Dr Selina Wray: “We still need to make sure that [women] are fully represented on programmes at scientific events.”
Christina Murray: “The way to inspire more women to enter science is at a really young age. I’m really passionate about that actually. I think widening participation activities and STEM activities in school age children is the way forward.”
Dr Jo Barnes: “I hope discussions about gender or any kind of particular background are irrelevant in years to come…that we have really good representation of many different groups of people so it’s not even discussed and then all that is left is the good research that you have done.”

Whether it’s a scientist you admire, a mentor who has helped you grow, or someone in your personal life that you look up to, we want to hear about the incredible women who have had an impact on you. Tweet us @AlzResearchUK and use #internationalwomensday and #pressforprogress to join the conversation.