When will there be new Alzheimer’s treatments?

We desperately need new treatments for Alzheimer’s. While current treatments can help people with symptoms, over 100 years of research hasn’t given us a treatment that can stop this devastating disease. But we are getting closer, with more treatments than ever before in development.

Understanding the processes in the brain that cause Alzheimer’s means new treatments can be developed to target them. Unlike the current symptomatic treatments, these new treatments aim to change the disease process itself – modifying brain changes to slow or stop the progression of the disease. 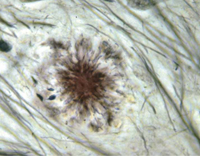 Picture of a microscopic ‘amyloid plaque’ in the brain – one of the hallmarks of Alzheimer’s disease.

Since the build-up of amyloid in the brain was the first process discovered to be involved in Alzheimer’s, many new treatments in development are aimed at amyloid. The amyloid protein is present in all of our brains, but during Alzheimer’s something goes wrong and it changes, becoming toxic and harming the brain. Many new treatments aim to stop it building up, or enhance its clearance. They range from inhibitors to immunotherapy – all targeted at different steps in the amyloid pathway. The time from the discovery of amyloid in 1984, to anti-amyloid treatments now being tested in late stage clinical trials reflects how long it takes for discoveries in the lab to be translated into potential treatments. 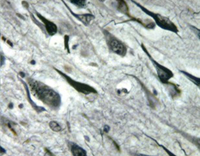 Other treatments are aimed at tau, though these are in earlier stages of development. Tau is another protein which goes awry in Alzheimer’s. It forms toxic ‘tangles’ inside nerve cells in the brain, stopping the cells working properly and eventually killing them.

Watch our audio slideshow for more on how research is targeting amyloid and tau to develop new treatments.

Further treatments still aim to target some of the other processes discovered to be involved in the disease more recently, including inflammation and insulin resistance. A list of treatments currently in clinical trials in the UK are listed here, and the US can be found here.

Progress and the future

Disappointingly, none of these treatments have yet made it to the clinic and patients. It’s difficult to predict when a new treatment will be found that does work, but the more treatments in clinical trials, the more chance of success. Many researchers believe successful treatment will involve a ‘cocktail’ of medications with multiple targets, similar to current state-of-the-art treatments for many cancers and AIDS.

Our Director of Research, Dr Eric Karran, recently spoke of his hopes for the future and the belief in the research community that a new therapy is not too far away.

While we work towards new therapies, there are treatments available today that can help with some of the symptoms of Alzheimer’s, improving:

While not a cure, huge numbers of people find these helpful. For more information, visit our website and for the latest updates on dementia research, sign up to our newsletter.