Every film I had ever seen about Alzheimer’s disease had been grim and depressing. My mother Ethel had Alzheimer’s yet somehow my daughter Holly and I continued to have a relationship with her. It may not have been what it once was but there was still lots of laughter. And lots of love.

We knew we were lucky but we reckoned that maybe, just maybe, we had something to say about living with Alzheimer’s. So that was why I decided to make the film ’Mum and Me’. 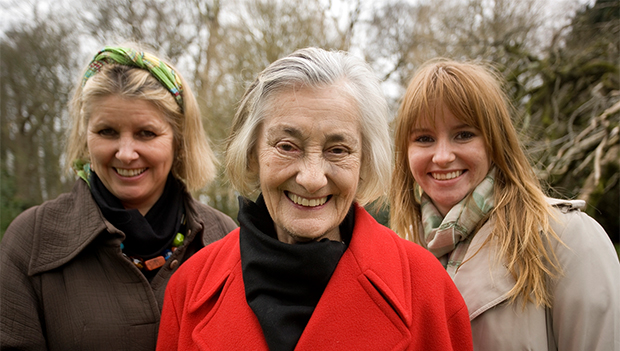 In a funny way, I sort of fell in love with my mum while doing the documentary. I used to think – rather meanly – that she was a rather ordinary woman, but I came to see there was something special in her – something quite extraordinary – in the way she simply refused to be miserable.

There was something special in Mum – something quite extraordinary – in the way she simply refused to be miserable.

Every month sometimes accompanied by my daughter Holly, I’d travel from London to visit Mum in Ayr, Scotland. Whatever we were doing; from daytrips to the seaside, to long afternoons stuck in the nursing home, we’d plonk the camera down and film whatever happened as we went about our time together.

I wasn’t sure I wanted to show this film publicly at all. And the one thing I did know was that I wasn’t going to chart my mother’s decline because that would have been too grim. What I did want to do was make a film that showed you can still have a life – and a laugh – together in spite of Alzheimer’s. Because that is what my mother was showing us was possible. What I came to see from Mum was that we shared a family trait – all three of us deal with difficult situations with humour. We laugh our way out of trouble. And while there are very sad moments in the film there’s also a lot of laughter.

One of my favourite memories is when Mum points to a photograph on the wall of a man she thinks is her father. I tell her that the man is not her father. Actually he’s John, my father, Ethel’s husband of 49 years who has since died. Ethel laughs: ‘Well that’s why he’s so bloody familiar.’ Again and again she laughed at even the saddest things.

‘Mum and Me’ was made over the next three years when Mum was living in a nursing home in Scotland.

I guessed I would come in for some flak for doing the film. People were bound to say that I exposed my mother, and there was also the issue of whether she was aware. But I knew I wasn’t in any way going to do harm to my mum. I made the film because I thought we could help other people whose relatives had Alzheimer’s disease. I think I made it also because I had come to realise that my mother was rather wonderful, and I wanted other people to get a sense of that. So the film became a story about family, love and laughter.

What you see however is not a gentle patient film. I think both mum and I are probably slightly hectoring and a bit bullying. But Mum became benign in her dotage, and was so sweet, charming, funny and positive, that you can’t help but love her. Our final few years together were good and I’m at peace with Mum now and that’s very important to me.

The film is honest. It had to be – I had exposed my family to public scrutiny so I had to show the reality of how hard it sometimes was.

The film is honest. It had to be – I had exposed my family to public scrutiny so I had to show the reality of how hard it sometimes was for me. I left in a scene showing me swearing in frustration at my mother. I didn’t need to leave that scene in but I chose to because I had to be honest and say, ‘I’m no saint’. The success of my visits depended on my mood because you need a lot of energy to get through the day. Mum no longer had what it took to generate conversation, so all she could do is reflect back whatever mood I was in.

The film went on to win several awards, including a coveted MIND Mental Health Award.

If showing our experiences made Alzheimer’s easier for just a handful of people then I am pleased I made the film. Mum, Holly and I had a few more years together before she died peacefully in the nursing home, surrounded by friends and staff who had loved her over the last decade of her life.

I sat by her side for the last month of her life – watching the light gently fade away. Alzheimers had impacted hugely on our life but we were lucky. My mother had shown Holly and I how we could still have a relationship with her, albeit a very different one, right to the end of her life.

Sue Bourne is a film producer/director. She has developed her own genre of documentaries that begin with a personal experience and attempt to say something more universal. Her films have seen her knock on the doors of all the houses in her London street for My Street for Channel 4, visit a number of pubs around the country with the most popular pub name in Britain for The Red Lion, also for Channel 4, and put together the story of her own experiences with her mother’s Alzheimer’s disease for Mum and Me for BBC1. A famed observational documentary maker, Sue reveals an intense commitment to her subjects.