How can a virtual reality game improve the diagnosis of dementia?

In May last year, when we joined forces with Deutsche Telekom and researchers at University College London (UCL) and the University of East Anglia (UEA) to launch the citizen science project Sea Hero Quest, we could not have anticipated the sensational response the game would have. The mobile app put your sense of direction to the test and challenged you to feats of nautical navigation in the name of neuroscience.

A staggering three million of you downloaded the game, generating an enormous pool of data – the equivalent of many thousands of years of conventional laboratory research. This now makes Sea Hero Quest the largest study of its kind in history!

Scientists have already been crunching the data you’ve provided, to reveal interesting insights into how spatial navigation abilities are different between men and women, across different countries, and through the course of our lives. But this work is just the tip of the iceberg. 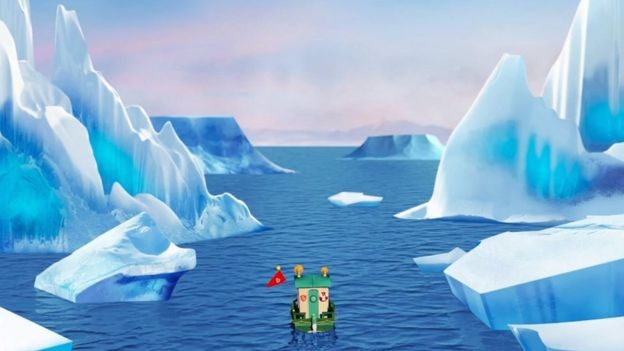 One of the earliest symptoms many people with dementia experience is an increased difficulty in finding their way around. We plan to use data from Sea Hero Quest to help pinpoint exactly how navigation ability changes when someone develops dementia. Our ultimate aim is to develop a sensitive test that could help to diagnose dementia earlier and more accurately.

Today, an exciting new phase of the project gets underway with the launch of an innovative virtual reality version of the app. Anyone with the Samsung Gear VR system can now download Sea Hero Quest VR for free and take part in even more, fun navigation challenges. But this time, instead of controlling a ship that you see in front of you on a screen, the VR headset places you directly at helm, from where you’ll be able to survey your surroundings and chart a course through tropical lagoons, icy ravines and swampy shores.

Alzheimer’s Research UK Champion Fred Walker was one of the first people to try out Sea Hero Quest VR. Fred lost his wife to Alzheimer’s disease after 46 years of marriage, and knows from his own experience how the condition can wreak havoc with a person’s navigation skills. You can hear Fred’s thoughts about the game in this video.

We know that at first glance VR can sometimes seem a little complicated or daunting. Some people may also see it as a futuristic flash-in-the-pan that’s more of a novelty than a credible tool for the masses. Our experience tells us otherwise. Last year we brought out A Walk Through Dementia, the virtual reality experience that puts you in the shoes of someone living with dementia. Thousands of people have now tried this app and almost everyone who talks to us about it comments on how powerful the technology is, and how straightforward it is to use.

One of the primary reasons for developing Sea Hero Quest for VR is that this is the likely format of the diagnostic tool that we’re working towards. VR doesn’t require people to learn any new skills, you can just put on a headset and look around as if you’re in the real world. This intuitive interface opens up the study to people who might not be used to playing touch-screen games and means it may be more accessible for many people living with dementia.

Just as with the mobile app, every move you make in the VR game is recorded and the anonymous data is sent off to be studied by scientists. While the mobile game has been able to provide masses of useful information, the VR experience has the added benefit of tracking players movements in three dimensions. By capturing subtle, intuitive actions such as stopping to look around when you are not sure of your bearings, the VR game will provide even deeper insights into the complex set of behaviours we all demonstrate when trying to get from A to B.

From the lab to your home

People who have played the mobile app will be familiar with some elements of the VR game, but the properties of virtual reality have now allowed us to draw upon one of the most widely used lab-based assessments of spatial navigation.

The Morris Water Maze was first developed in 1981 and since this time it has become a mainstay for researchers working to understand or promote spatial navigation. The task was developed for research with rats and involves them using visual cues, such as pictures on the walls, to orientate themselves and make their way to a target destination. With so much research already having made use of the Morris Water Maze, scientists have a deep understanding of the task and how performance on the test relates to different facets of brain function. Sea Hero Quest will now allow us to build on this understanding using data from people who play the virtual reality game.

Improving the diagnosis of dementia is a key goal of our work at Alzheimer’s Research UK, and we’re delighted to continue to work with Deutsche Telekom as they expand their vision of Sea Hero Quest. Future treatments are likely to be most effective at the earliest stages of the condition, before there has been too much damage to the brain. Sea Hero Quest is a great example of how your support is allowing us to harness the latest technology and adopt innovative new approaches to improve lives for people with dementia.

You can help to support this project by donating or visiting seaheroquest.com to find out how you can download the mobile app and VR game.