How can a mobile game help detect Alzheimer’s risk?

You may have seen the latest news that the mobile game, Sea Hero Quest, has helped distinguish between people who are at an increased genetic risk of Alzheimer’s

But what is Sea Hero Quest? And how can this game spot those at risk of Alzheimer’s?

The importance of early detection

Working for Alzheimer’s Research UK means that I often hear stories where people with dementia who get lost or can’t find their way around. Changes in our navigation ability is a common early symptom of the condition.

Yet scientists don’t know enough about the navigational abilities of healthy people to be able to develop a test sensitive enough to reliably detect problems that arise in dementia.

We know that treatments we’re working hard to deliver are almost certainly going to be more effective when people with dementia can access them as early as possible. It’s imperative we focus on early disease detection in tandem with treatment development. Alzheimer’s Research UK is committed to making breakthroughs possible in both of these areas of research. And new developments will go hand in hand to help transform lives.

It’s a mobile app that tests players’ navigational ability while collecting information on their performance in the game. The fun and intuitive game measures the gamers ability to make their way through a series of quests and it has rewritten the rules when it comes to how we do dementia research.

From all corners of the globe, 4.3 million of you downloaded the game, generating an enormous pool of data– the equivalent of many thousands of years of conventional laboratory research.

How it is steering research

And now dementia researchers from the University of East Anglia and University College London are further unravelling the complex information generated when you play. Today they have revealed new insights into how people at high risk of Alzheimer’s play the game differently to those who are not.

To do this, researchers dived straight into the deep end, analysing how more than 27,000 of you made your way through the game.

When playing, the game monitors how we navigate the mazes, reference landmarks, and use our sense of direction. This helps scientists to build a picture of what typical navigation looks like across age groups at a population level and compare similarities and note differences in smaller groups.

Using big data techniques the scientists looked at how 27,103 people – who were comparable to a smaller lab-based group – played the game. With big data, researchers can begin to reveal patterns and trends, and that’s exactly what they did.

By looking at your performance on specific levels, and measuring the distance travelled and how long it took, researchers built up an idea of how people play the game. 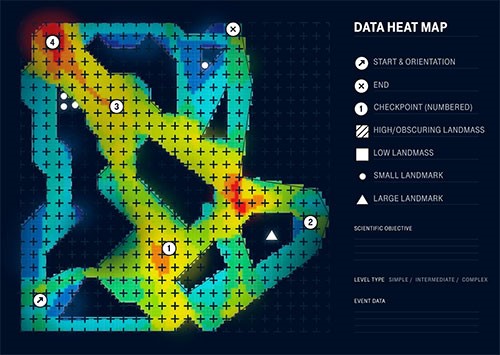 The team then tested Sea Hero Quest in a smaller group of people in a laboratory. In the smaller lab group, 60 volunteers played the game. Half of these volunteers had a key genetic risk factor for Alzheimer’s.

Genetic risk for Alzheimer’s is complicated. People (around one in every four) who have one copy of a gene called APOE4 are around three times more likely to be affected by Alzheimer’s and develop the disease at a younger age.

The scientists then compared how to those at risk of Alzheimer’s performed on Sea Hero Quest compared to the 27,000 of you who played the game.

They found that people in midlife display changes in navigational abilities before displaying any symptoms of Alzheimer’s disease.

Intriguingly, and most importantly, they also found that people at genetically higher risk took less efficient routes through the maps compared to the general population – the game could distinguish between those with the APOE4 gene and those without. What’s more amazing is that a conventional memory and thinking test could not tell these people apart!

Scientists also looked at whether the sex of the player had on performance in completing the task. Interestingly they found that a person’s sex did have an impact on the amount of time taken to search for buoys and complete the levels – with men tending to do slightly better than women.

Some previous research has highlighted differences in how men and women perform in the game. And researchers have suggested possible reasons for these findings.

Continuing the Quest for a breakthrough

The new results show that using big data could help to improve the early and accurate detection of the diseases that cause dementia and revolutionise the way we research and treat the condition.

But this is just the tip of the iceberg. We expect plenty more findings to continue to pour out of the Sea Hero Quest study. The game demonstrates that we must continue to innovate, be bold and find new ways to tackle the challenges that stand in our way.

The Sea Hero Quest project is an amazing example of how research can help scientists get one step closer to a life-changing breakthrough.