Head injury, sport and dementia: should we be worried?

It is both a challenging and exciting time to be investigating the relationship between traumatic brain injury (TBI) and dementia. A recent surge in attention around the topic is welcome but links with the milder-end of head injury in sport have to be treated with caution.

A recent BBC documentary fronted by former footballer Alan Shearer, looked at a possible link between football and dementia.  His motivation for making the film seemed to be a concern that rates of dementia might be higher in retired footballers than the general population. At face value, it looks like Shearer might have a point: of the victorious 1966 England world cup squad Martin Peters, Nobby Styles and Ray Wilson all developed dementia.

Shearer was keen to understand whether heading the football might cause long term brain problems. In the documentary he found out about some of the effects of trauma on the brain in general, and even heard from researchers who have shown changes in brain electrical patterns shortly after someone performs a run of headers. However, it’s not clear whether these changes are specific to heading, or whether they have any relationship whatsoever with memory problems or dementia in the long-run.

What is clear is a need for further research. 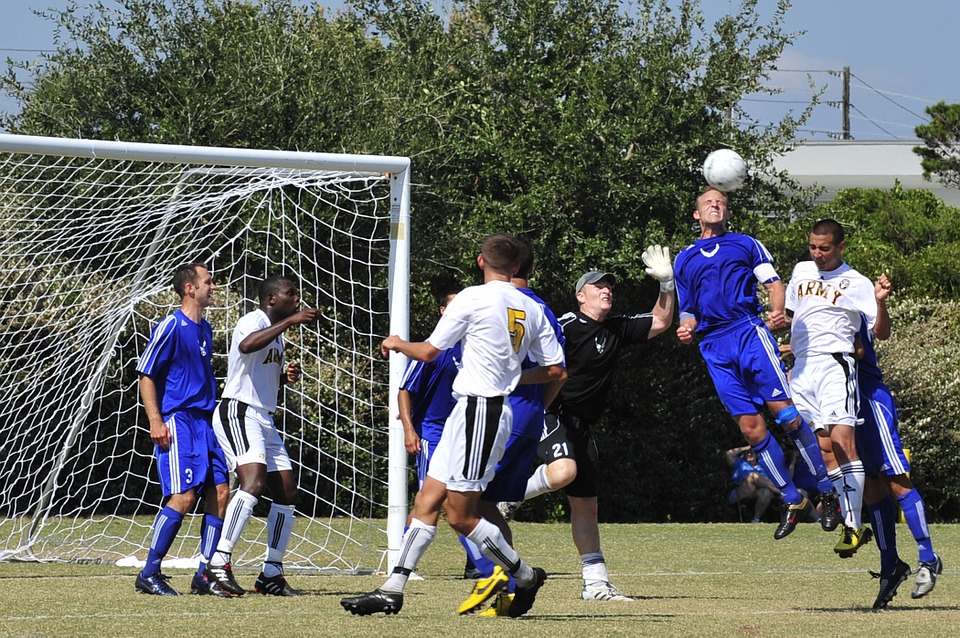 Being clear about what we mean: head injury, concussion and traumatic brain injury

The way we talk about this topic can sometimes be confusing. Head injury is any event in which someone receives a blow to the head which either causes physical damage or troublesome symptoms. If there are symptoms related to the hit, for example short-lived memory problems, a person might be described as having a ‘concussion’. However, many of the symptoms that people call a concussion, such as dizziness or headache can take place without any physical damage to the brain. If doctors suspect that there is physical brain damage, we might diagnose ‘traumatic brain injury’.

While research suggests that people with a traumatic brain injury could be around 50% (1.5 times) more likely to more likely to develop dementia, head injuries can vary enormously, and so can the diseases that cause dementia, so the relationship is hard to unravel.

We do know that one specific type of dementia has been associated with head injury, known as ‘chronic traumatic encephalopathy’ or CTE for short. First described in former boxers by Harrison Martland, an American pathologist, the earliest observations were of a combination of movement and thinking problems which he called the ‘punch drunk’ syndrome.

It’s very unclear how common CTE is, as we can only reliably diagnose it by examining the brain after someone has died. CTE changes have been seen in a relatively small number of people typically following repeated injury, and very occasionally after a single severe hit.

US neuropathologist Bennet Omalu observed the typical changes of CTE in the brain of Mike Webster in the early 2000s. Webster was a star player for the Pittsburgh Steelers, winning the Super Bowl on several occasions before experiencing profound personality change prior to his death aged 50, after which his brain was donated to research.

This prompted an upsurge of research in CTE, particularly within American Football. Many retired players who experienced symptoms had brain examinations after death, and a recent study reported CTE in 110 of 111 brains of National Football League (NFL) players. While this is highly concerning, there’s a catch – the group was never designed to be representative of all players. Those who experienced symptoms would have been more motivated to donate their brains for research, and this is likely to have inflated the apparent rate of the disease. However, this doesn’t change the fact that very high levels of disease were observed in this likely high-risk group.

The types of injuries sustained in football (‘soccer’) seem to be quite different in type and frequency when compared to American Football. There has been less investigation here into CTE rates, although a 2017 study at the University College London included examination of the brains of 6 former footballers who had been diagnosed with dementia. Strikingly, four of these had CTE according to current criteria. Once again, as in NFL players, it’s hard to draw any conclusions about how common CTE and dementia are in footballers who didn’t take part in the study, without looking at a bigger, and ‘unbiased’ sample. This is an important direction for future research.

We need to look in more depth at thinking and memory problems as well as brain changes after trauma. Using well-designed studies to look in detail at the relationship between types of head injury and dementia will help us understand how prevalent CTE is across different groups of sports people and not just in those people who exhibit particularly strong symptoms. The Football Association has recently agreed to fund a study looking at dementia rates in retired soccer players to compare these with their rates of head injury. Known as the FIELD study (Football’s InfluencE on Lifelong health and Dementia risk) the research led by Dr Willie Stewart at the University of Glasgow is set to get underway soon.

Critically, we need to get better at predicting and diagnosing dementia after injury while people are still alive. This is my focus, working at Imperial College London in Prof David Sharp’s team, together with Alzheimer’s expert Prof Jonathan Schott in the Dementia Research Centre at UCL. Supported by Alzheimer’s Research UK, Imperial Healthcare Charity and NIHR, we are looking for brain shrinkage soon after a person experiences a head injury, to understand how this relates to thinking and memory problems. We have already seen striking rates of brain shrinkage on MRI scans after trauma, reflecting a loss of brain cells. The work will also allow us to see whether long-term problems can be predicted using scans and an ultra-sensitive blood test for proteins released during brain damage.

By understanding these changes, we hope to design studies that can test medicines to stop nerve cell loss and prevent dementia after traumatic brain injury. Finding treatments in this setting is our goal and this may also have important implications for other forms of dementia including Alzheimer’s.

Our work will help us to answer some of the most important questions in the field: how does dementia develop after trauma? How does this relate to mild injuries or concussions? And what can we do to stop it developing?

What should we do today?

Playing sport as part of an active lifestyle has important benefits for health. Maintaining good heart health can help reduce the risk of dementia as well as conditions like heart disease and stroke. The governing bodies who set the rules in sport should enhance precautions to minimise the risk to players related to head injury wherever possible. This might mean making changes to what represents an acceptable tackle, enforcing and updating concussion and return-to-play guidelines, or restricting access by setting an age at which children can partake in contact activities.

The recent findings do introduce a very strong note of caution for participants in sports that feature repeated or severe blows to the head. Participation is a decision that depends on how individuals weigh potential risks and benefits and deal with uncertainty. This becomes even more difficult in the case of children who cannot yet to take their own decisions and must rely on responsible adults such as parents and teachers to do so. It is now apparent that this is not necessarily a trivial decision.

We need more evidence, and we need it fast. I hope that working alongside scientists globally and with those who have had brain injuries, our research will both help empower people to make informed decisions about lifestyle and improve outcomes after injury.

He studied medicine at Cambridge and University College London, developing an interest in acquired brain injury during training posts at St Thomas' Hospital and the National Hospital for Neurology and Neurosurgery.

His research interest is the relationship of traumatic brain injury (TBI) to dementia. Supervised by Prof David Sharp, he is focused on the development of imaging tools that can measure brain degeneration in patients after TBI. He is aiming to improve our ability to diagnose significant head injuries when they take place and working towards treatments that could prevent brain degeneration after injury.