There are several diseases that cause dementia including vascular dementia and dementia with Lewy bodies, but the most common cause of dementia is Alzheimer’s disease.

Alzheimer’s disease is the culprit in around 2/3 of dementias.

What happens in the brain in Alzheimer’s disease?

Over the course of Alzheimer’s disease, nerve cells in the brain become damaged and die.

This causes distressing symptoms such as memory loss and thinking problems, that slowly get worse over time until someone requires full time care.

Scientists from across the globe have been working together to find out why this loss of nerve cells happens. By joining forces, they can make vital discoveries faster.

The first step is to understand all the steps that lead to Alzheimer’s disease.

Alzheimer’s would be easier to understand if it was as simple as a chain of falling dominoes, where a single, small nudge sets off the chain reaction.

Instead, we’re learning that different things contribute to the chain reaction leading to Alzheimer’s.

And, unlike dominoes, which fall in seconds, the steps that lead to Alzheimer’s take place over many decades. Getting as much detail as we can about each step is vital, as it highlights key processes that could unlock the search for life-changing treatments.

One of the theories that scientists have for what drives Alzheimer’s is called the ‘amyloid cascade’ and is based around a protein called amyloid.

Thanks to cutting-edge genetic and molecular research, we’ve seen growing evidence pointing to key changes that cause damage in the brain in Alzheimer’s.

First, a protein called amyloid sticks together to form abnormal clumps between nerve cells in the brain. These clumps start a damaging chain reaction within nerve cells, which gets in the way of how our brain cells work.

Amyloid is a key hallmark of Alzheimer’s disease. This protein is created by chopping up a larger protein called amyloid precursor protein (APP). The way that APP is chopped up changes which forms of amyloid are made.

In people with Alzheimer’s, sticky forms of amyloid clump together and build up into ‘amyloid plaques’ in the brain.

This amyloid build-up has a range of unhelpful knock-on effects for brain cells. It can affect how cells use energy, how they communicate and how they clear away waste.

Amyloid also triggers our immune system to kick in. Microglia are immune cells that would usually clear up waste to maintain a healthy brain environment. But in Alzheimer’s, they are pushed to their limits and start to make things worse.

One of the ways they do this is by promoting inflammation. Inflammation is a natural process that happens when we get an injury or an infection: in the body, it’s what causes the area around a cut to go red and swell as part of healing. However, scientists are finding out that inflammation in the brain might do more harm than good, damaging healthy brain cells and their ability to fight against the toxic proteins.

Amyloid can also disrupt blood flow in the brain, by building-up in blood vessel walls and affecting the ability of blood vessels to respond to changes in demand. Blood flow is vital to the brain, providing cells with oxygen and food to function. When this delivery is disrupted, nerve cells become unhealthy, inflammation kicks in and healthy nerve cells can be damaged too. 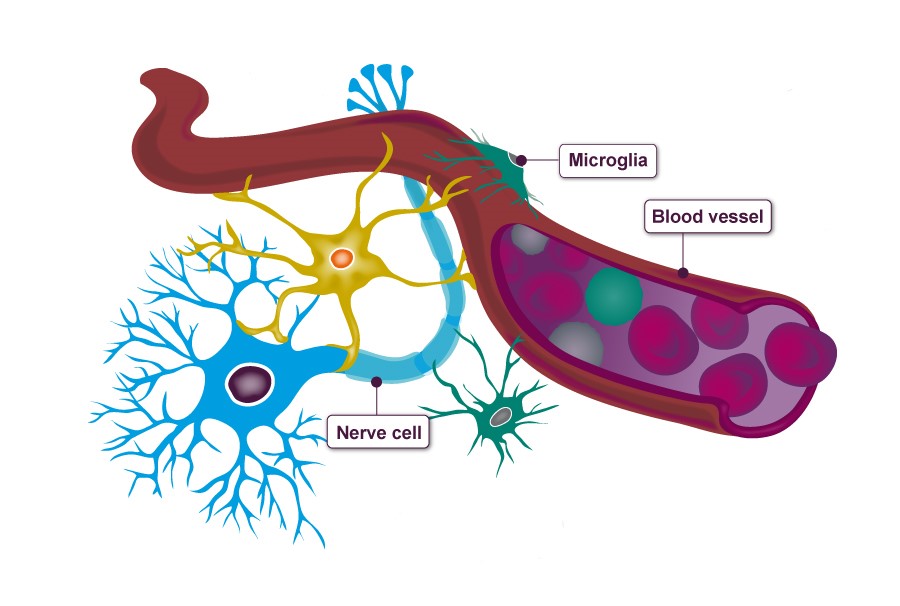 Tau is a protein inside our nerve cells that helps with structure and transport. In Alzheimer’s, tau also starts to behave out of character. Scientists think that these changes may be due to the build-up of toxic amyloid too. These changes cause tau proteins to stick to each other form tau tangles inside nerve cells.

Abnormal tau can spread across the brain, passing from cell to cell, like a wildfire. This spread causes further brain damage.

The appearance of tau tangles in the brain coincides with the onset of Alzheimer’s symptoms, so researchers believe it may be a key final step in the toxic chain of events that causes nerve cells to die.

Researchers are working tirelessly to understand the causes of Alzheimer’s disease.

Huge leaps in our knowledge have already been made by the research community, identifying key players, unravelling the sequence of events and understanding which processes are the most toxic.

Scientists are working together across the globe to drive progress in this area, adding new pieces of knowledge to our growing understanding of Alzheimer’s.

We know these efforts will bring about promising breakthroughs in the years ahead.

Your support is vital for this work. Donate today to help make breakthroughs possible in dementia research at alzres.uk/donate