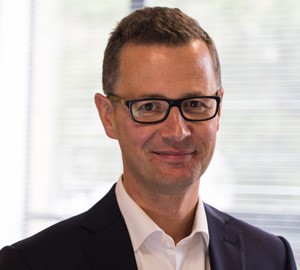 This March saw 650 top dementia researchers attend the Alzheimer’s Research UK Research Conference. Delegates travelled from across the country and beyond to London to present their findings and gain insight into the cutting-edge science paving the way for new dementia treatments.

A highlight of the conference, in which so much was covered, was a presentation from Dr John Skidmore, Chief Scientific Officer at our Cambridge Drug Discovery Institute (DDI). He spoke with fascinating insight about the progress his team is making towards drugs that could tackle the processes driving damage to the brain in the diseases that cause dementia.

Delving into the Drug Discovery Institute

Back in 2015 we announced our £30m Drug Discovery Alliance and launched three flagship Drug Discovery Institutes at the Universities of Cambridge, Oxford and University College London (UCL). The DDIs now employ scientists in state-of-the-art facilities to fast-track the development of new treatments for Alzheimer’s disease and other dementias.

In his presentation, Dr Skidmore talked about the work of the Cambridge Drug Discovery Institute and updated attendees on significant progress his team is making towards drugs that could limit damage to nerve cells in diseases like Alzheimer’s.

Proteins are the building blocks of life. There are an enormous variety of proteins in our bodies, and the activity of these complex molecules is what drives the processes that keep our cells functioning. A lot of medical research is about understanding these cellular processes — finding out how they go wrong and how we can put them right.

The Cambridge DDI has a particular focus on mechanisms that keep the levels of all the body’s proteins in check, a process known as ‘proteostasis’. There is a continuous flux in protein levels in our bodies, through the production of new proteins and the activity of waste disposal mechanisms. Our cells are usually able to maintain a careful balance between these processes, but in a number of brain diseases this balance starts to go awry and certain proteins build up inside or around nerve cells.

Proteins are made from long chains of smaller molecules called amino acids. These long chains are folded into particular shapes. When proteins are folded incorrectly they can form sticky tangles, which clump together in larger and larger units, interfere with the way cells work, and lead to damage. Misfolded proteins play a central role in diseases including Alzheimer’s disease, frontotemporal dementia, and dementia with Lewy bodies.

A waste disposal process known as autophagy can bag up misfolded proteins ready for destruction and recycling. Normally this goes on behind the scenes without any glitches, however, when there is too much protein building up, the cell’s waste disposal system can become overwhelmed.

Dr Skidmore and his team are working on drugs that boost autophagy and help clear away these clumps of protein. 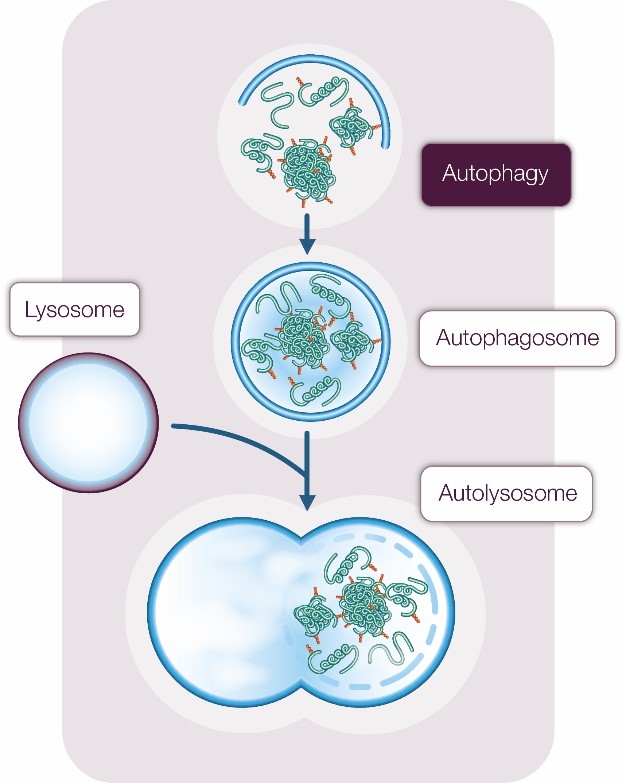 The Cambridge DDI is positioned to seize upon new findings that emerge from academic research at the University of Cambridge and take forward work that could lead to new dementia drugs. Dr Skidmore works particularly closely with the Institute’s Lead Academic Scientist, Prof David Rubinsztein, who is a leading expert in the role of autophagy in degenerative brain diseases.

A key part of the drug discovery process is picking the right target. Autophagy involves a complex chain of molecular events, with each link being an interaction between specific proteins. Scientists at the DDI are working on drugs that latch on to these proteins and alter their activity in a way that boosts autophagy.

Following leads thrown up by the work of Prof Rubinsztein and his colleagues, the Cambridge DDI has zeroed in on proteins called PI5P4 kinases. These proteins limit autophagy in nerve cells, so by blocking them with targeted drugs, the DDI is hoping to increase autophagy and boost the cell’s ability to clear away toxic proteins.

Using a combination of computer modelling and ‘test tube’ experiments DDI team has looked at many thousands of chemical compounds to see if they are able to block the activity of PI5P4 kinases. This led to the identification of a number of compounds which the team improved further through rounds of design, chemical synthesis and testing, building in the properties needed for a drug. 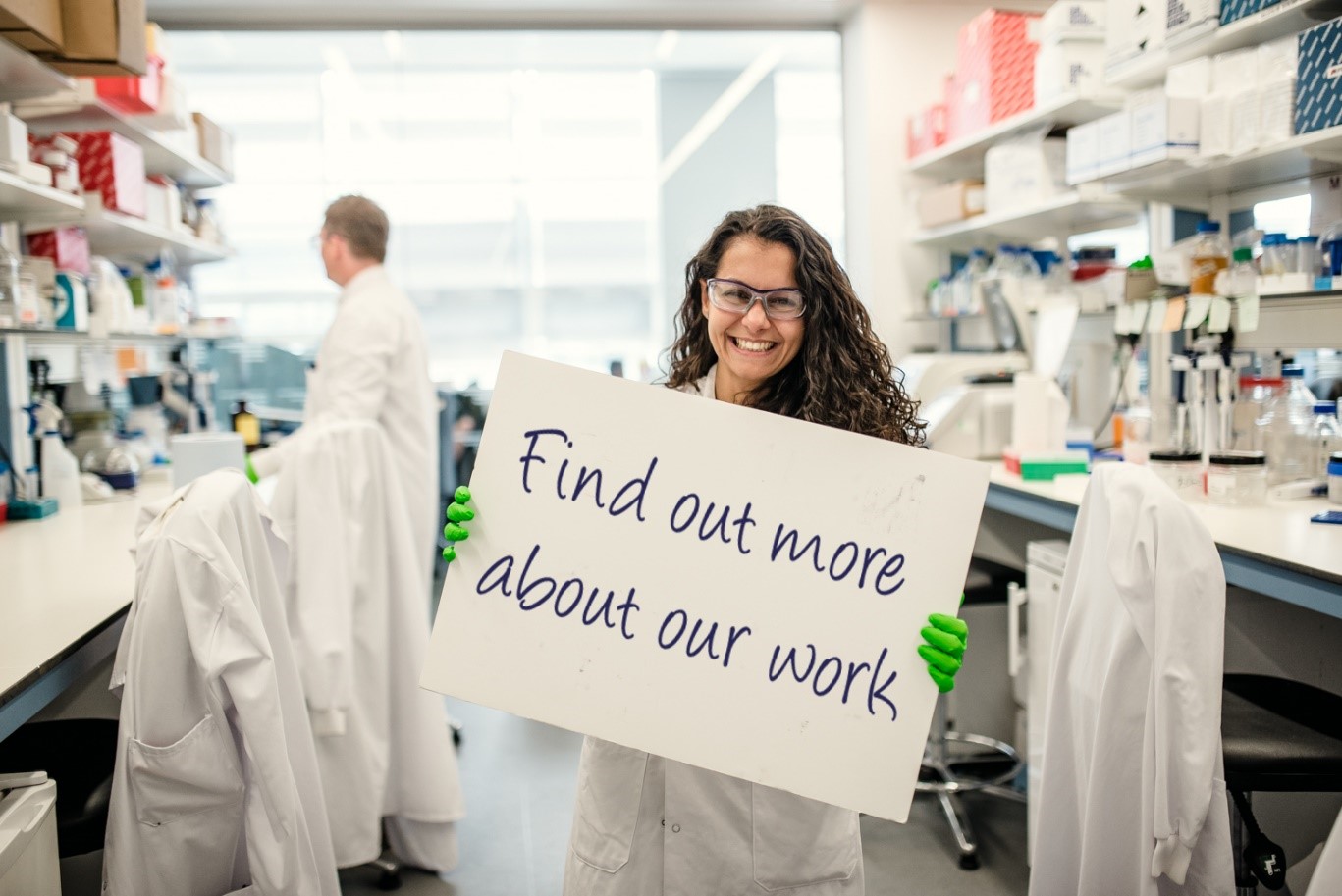 Through these experiments, the scientists at the Cambridge Drug Discovery Institute have developed a number of lead compounds that are able to increase autophagy and clear the clumps of misfolded proteins in experiments carried out in cells. These compounds also have many of the properties required of drugs, such as being able to get into the brain when administered orally.

There is a legal requirement for all drugs to be tested in animals before they can progress into trials involving people. This important part of the drug discovery process allows researchers to move from experiments in a dish in the lab, to being able to see the effect of a drug in a living brain that has many important similarities to those of people.

The DDI is in close contact with pharmaceutical companies and if these compounds are successful in animal studies, there is a clear path to develop compounds ready for human clinical trials.

The Alzheimer’s Research UK Drug Discovery Alliance was set up to bridge the gap between university research and the pharmaceutical companies. It is fantastic to see how the Cambridge DDI took what was an interesting finding about a cellular process, and thanks to your support, turned it into potential drugs that are now entering a key stage of preclinical testing.

This is crucial progress, but there is still a long distance between this stage of research and something that makes a difference to people’s lives. There are promising dementia drugs that are already in clinical trials, and while we are optimistic that one or more of these will be effective, to have the best chance of success it is crucial that we maintain a healthy pipeline of potential drugs.

The picture below shows the progress of different projects in the Drug Discovery Alliance last year. Protein housekeeping is just one of the disease processes being explored, and the Institutes are making progress on a number of different fronts, with a growing portfolio of projects. 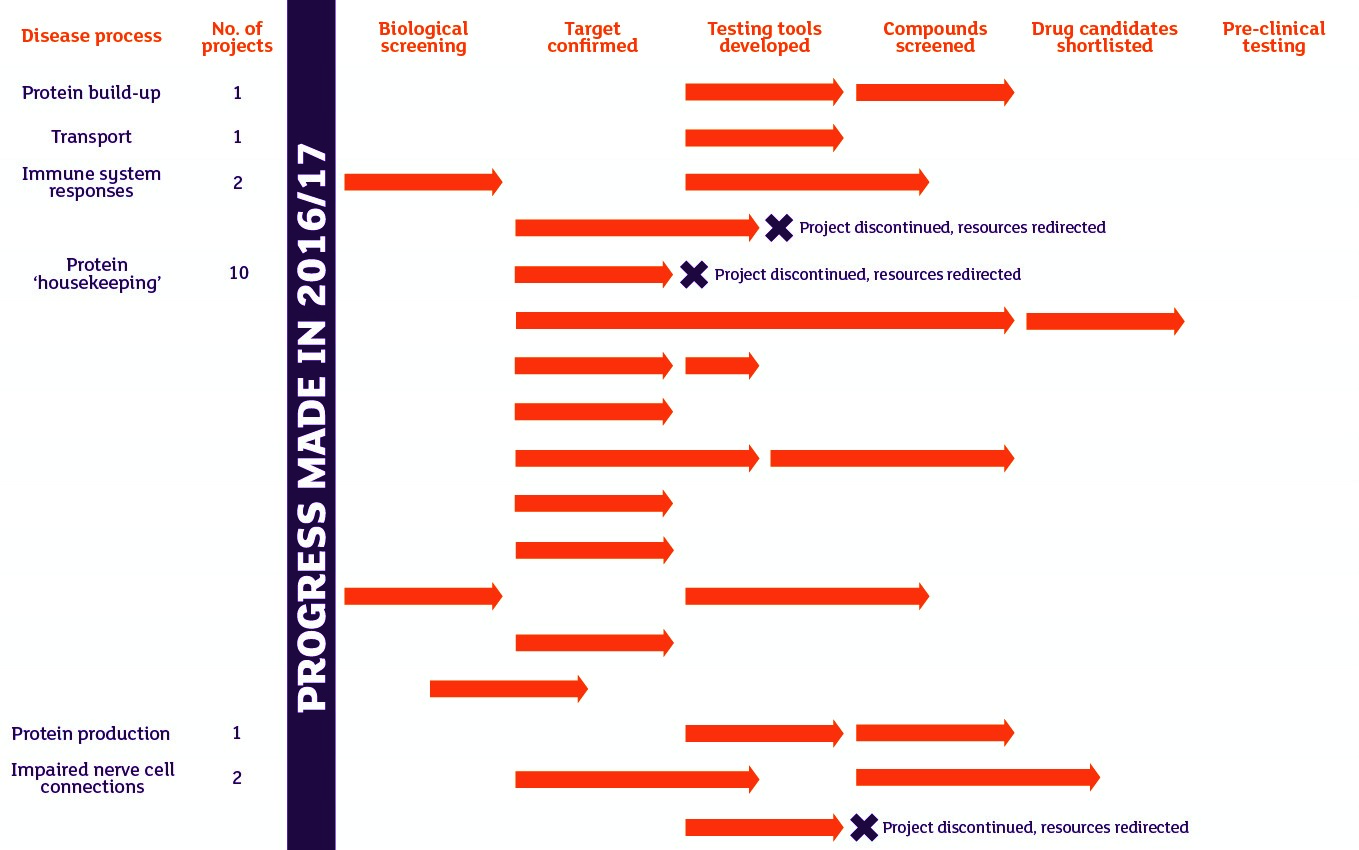 We look forward to bringing you further updates about these projects as more make it through to preclinical testing and clinical trials.

It has been over 15 years since the last dementia treatment became available, but thanks to your support Alzheimer’s Research UK is investing in initiatives like the Drug Discovery Alliance, which are dedicated to bringing about new treatments sooner.

Research has the power to change lives. Donate today to support pioneering science that can defeat dementia.