15 January 2021 - Comments Off on Dementia with Lewy bodies explained

The documentary ‘Robin’s Wish’ shows clearly that dementia can affect people in many ways, some more physical than the memory and thinking changes many people often associate with the condition. One of these is dementia with Lewy bodies (DLB), a condition that Oscar-winning actor Robin Williams lived with for many years.

It is the third most common type of dementia. Roughly 100,000 people in the UK are likely to be living with the condition, which means that for every 100 people with dementia, around 10-15 will have DLB. 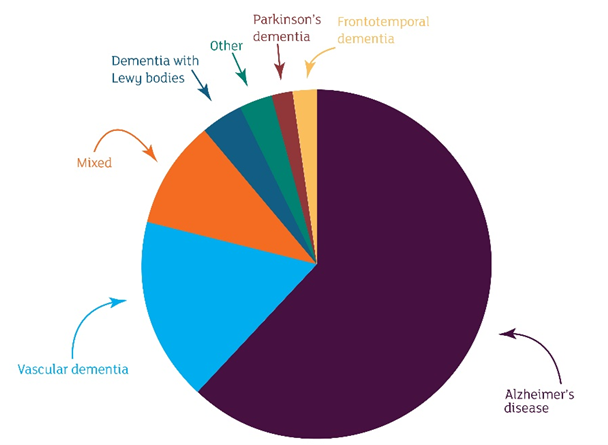 Despite many living with the condition, it is still a relatively misunderstood, and often misdiagnosed type of dementia. Robin Williams’ experience, as well as work by Alzheimer’s Research UK and organisations like the Lewy Body Society has helped to raise awareness of the condition in recent years, and we are funding vital research projects into the causes of DLB, how to improve diagnosis, and discovering new treatments for the disease.

Dementia with Lewy bodies has symptoms very similar to Parkinson’s disease, and in both conditions, people experience changes in movement. The diagnosis a doctor gives will depend on when symptoms of memory loss first start.

Life with dementia with Lewy bodies can vary as people experience ‘good days’ and ‘bad days’. Some people can experience fluctuations in their thinking and memory even from hour to hour.

Watch Themiya’s story to hear more about living with dementia with Lewy bodies:

But why do these happen?

How DLB affects the brain

Dementia with Lewy bodies is caused by an abnormal build-up of a protein called alpha-synuclein in the brain. Alpha-synuclein is found normally in all of our brains, providing structural support for our brain cells, and helping them communicate properly. It also regulates a chemical in the brain called dopamine, which helps to control how we move.

If alpha-synuclein builds up abnormally in our brain, it forms clumps called Lewy bodies. These are the hallmark of DLB. Lewy bodies stop brain cells from being able to talk to one another effectively and can cause some brain cells to die.

The damage caused by Lewy bodies can affect many different parts of the brain including the parts that control:

How does DLB affect movement?

There are many different neurotransmitters, each with different functions.

The neurotransmitter that helps coordinate how we move is called dopamine. In DLB, Lewy bodies block dopamine production, stopping it from doing its job coordinating our movement.

Because of this, people living with DLB may experience a range of different movement problems. These can include:

When we sleep our body goes through different sleep stages, each with important functions.

One stage is called rapid eye movement (REM) sleep, which normally makes up about 20–25% of our total sleep time.

During REM sleep, our muscles relax, and our brain sends messages that stop us from moving about. In this stage your eyes move, and you dream, and your heart rate and blood pressure increase to levels similar to when you are awake. Your brain works during this stage of sleep to process information, learn, and make and store memories.

People with dementia with Lewy bodies often have disrupted REM sleep and can act out during dreams by kicking and talking. Doctors refer to this as REM sleep disorder and it can start to happen years before a person is diagnosed with DLB.

One of the most distinctive symptoms of DLB is hallucinations. These can be very frightening for people living with the condition, and hard for loved ones and carers to understand – but why do they happen?

Hallucinations are sensory experiences that feel real but are only happening in the mind and are only temporary.

People living with DLB can experience a range of different hallucinations, such as seeing people or animals, and these are often very detailed and realistic for the person experiencing them. Sometimes they can be unpleasant and make the person feel as if they are trapped in a different world, or that people are coming into their homes.

Research is ongoing to try to understand why people with DLB experience hallucinations. So far, researchers believe it could be a mixture of sleep disturbances and damage to the areas of the brain that process visual information.

Alzheimer’s Research UK is currently funding two pioneering projects in London and Cambridge to explore hallucinations in DLB, and we hope this will help uncover why they happen and new ways to treat this distressing symptom.

Where to go for support

For further support and advice on living with dementia with Lewy bodies, or caring for someone with the condition, you can contact The Lewy Body Society on 01942 914000 or by email at info@lewybody.org

If you have questions about dementia, dementia research or would like to take part in research studies, please contact the Dementia Research Infoline 0300 111 5111 (9-5pm Monday to Friday) or email infoline@alzheimersresearchuk.org