Dementia research in 2014: looking back at our proudest achievements

This time of year is full of lists. Best album, five ways to use your Christmas turkey leftovers, 10 pictures of cats dressed as reindeer…. Hopefully you’ve got room for one more! 2014 has been a year of huge strides in research and we want to share some of these successes with you. Our researchers are working tirelessly to uncover clues about how to diagnose, treat and prevent dementia. The steps they took in 2014 mean that these breakthroughs are ever closer. Let’s take a look at some of the inspiring stories from the past year:

Researchers hit the headlines in July with a blood test that can be used to predict whether people with mild cognitive impairment (MCI), a term used to describe early memory and thinking problems, were likely to go on to develop Alzheimer’s. The simple blood test looked at a ‘protein fingerprint’ – 10 proteins that when produced in at certain levels suggest that someone with MCI will go on to develop Alzheimer’s within a year. If the results hold true in larger and longer studies, the future potential for this test is huge. While it would not be considered as a screening tool for the general population at this stage, it could prove very helpful for clinical trials; treating people at the beginning of the disease may be crucial for therapies to work. Read more about it in our blog post from July.

Speaking of clinical trials, Alzheimer’s Research UK launched the Global Clinical Trials Fund (GCTF) at the beginning of December. The fund will provide crucial support for phase I and phase II clinical trials. Clinical trials are essential for new treatments to reach the people that need them most, but they often struggle to get off the ground. This new investment will ensure that the groundbreaking research that takes place in labs across the world can really help people living with dementia. 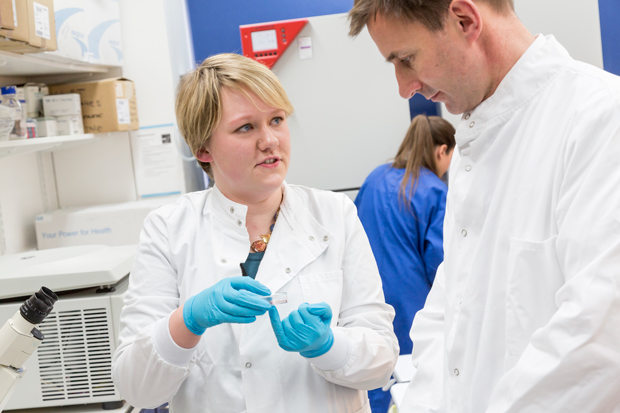 Selina explains her work to the Health Secretary Jeremy Hunt when he visited the UCL labs in 2013.

This year, Dr Selina Wray won a competition to seek out new ways to study the protein tau – a hallmark protein of Alzheimer’s. She used a technique that transforms human skin cells into stem cells, which can then be reprogrammed to become any cell in the body. By adding the right ‘ingredients’, these stem cells become nerve cells. Dr Wray will now use this technique to not only understand how abnormal tau tangles form in the brain in Alzheimer’s, but also test potential new drugs that will halt the build-up of this damaging protein.

The transformation of human skin cells to nerve cells in the laboratory will help researchers understand the causes of diseases such as Alzheimer’s and frontotemporal dementia, as well as unravel genetic risk factors and test new drugs. Alzheimer’s Research UK believes in funding pioneering research and that’s why we invested in the Alzheimer’s Research UK Stem Cell Research Centre.

The Dementia Research Infoline was launched in June as a point of call for all your questions about dementia and research. We’re really proud of this new service, because as well as being the largest dedicated funder of dementia research in the UK, we strive to help people understand more about the condition that affects 830,000 people in this country. We’re also committed to helping people get involved in research and are partners with the NIHR and Alzheimer’s Society on ‘Join dementia research’ – a system that lets the public register their interest in volunteering for research studies. For more information, please give us a ring on 0300 111 5 111 or email infoline@alzheimersresearchuk.org.

Collaboration is crucial in research. That’s why we committed £1.2 million to the Alzheimer’s Research UK Research Network in September. The Network unites over 700 researchers in 15 Centres across the UK and allows knowledge and resource sharing, with a common aim to defeat dementia. 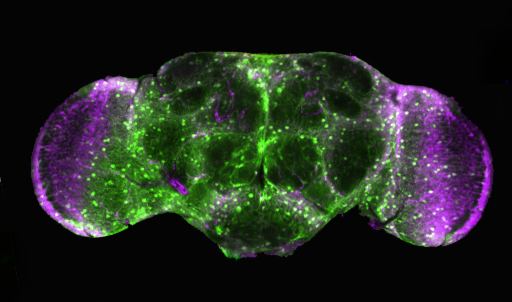 Frontotemporal dementia (FTD) is a rare form of dementia, associated with personality and behavioural changes as well as speech problems. While a mutation – a change to DNA – In the C9orf72 gene was found a few years ago to be responsible for some cases of FTD, researchers didn’t understand how this genetic change led to nerve cell damage. In work published in August and funded by Alzheimer’s Research UK, a team of scientists at University College London revealed a way in which this mutation leads to damage. They found that toxic protein fragments could form and this step forward will now allow researchers to target these fragments to design new ways to stop the damage and potentially treat FTD.

DNA code isn’t the only way our genes affect our health. Dr Katie Lunnon at the University of Exeter revealed earlier this year that so called ‘epigenetic’ changes – chemical modifications to DNA that alter whether a gene is switched on or off – also affect Alzheimer’s risk. As these epigenetic changes are affected by the environment, this study sheds new light on the mechanisms driving the disease and how they could be targeted for new treatments.

Underfunding of dementia research means that there are fewer scientists tackling the complex causes of dementia than there should be. Our Interdisciplinary Research Grant scheme aims to attract researchers from other disciplines, bringing with them a wealth of expertise that can be applied to help us find ways to diagnose, prevent and treat dementia. This year we awarded our first three grants, and you can read more about two of our new Interdisciplinary researchers, Dr Jason Berwick and Dr Clare Bryant in our Scientist Focus.

Every year, Alzheimer’s Research UK holds a conference, bringing together the best minds in dementia research to discuss progress and form new ideas. In March, our Oxford Network Centre played host to the conference, which attracted the largest turn-out of researchers in the history of the charity. University of Southampton researchers made the headlines, including a study suggesting that maternal diet can affect dementia risk in mice and evidence that infections can drive the progression of Alzheimer’s. You can look back at our live blog from the conference.

These strides forward are just some of the many that the charity and our researchers have taken thanks to your generous support. Your contributions allow us to create new funding schemes that drive innovation and take us closer to a cure for dementia.