Alzheimer’s Research UK is proud to be at the forefront of dementia research. Over the last decade, understanding of the diseases that cause dementia has been increasing at a rate second only to cancer research – a field with four times as many researchers and with much higher levels of funding. Since 2009, the number of dementia researchers has more than doubled, and the number of discoveries we’ve funded per year has increased five-fold.

Each year Alzheimer’s Research UK awards £25,000 of research expenses to the most outstanding early career researcher in the field of biomedical dementia research, the David Hague Early Career Investigator of the Year Award. In 2021 the prize will be shared by two dementia researchers who have excelled in their field.

Dr Sophie Bradley is a senior lecturer at the University of Glasgow. Dr Bradley investigates a specific group of proteins, known as G-protein coupled receptors, that could be targeted by potential new drugs for Alzheimer’s disease. Dr Bradley is not only recognised for her work in the lab but also her commitment to communicating research to the public.

Prof Renzo Mancuso from the VIB-UAntwerp Center in Belgium is the other recipient of the 2021 David Hague award. Prof Mancuso’s lab in Belgium focuses on understanding the role of the immune system in Alzheimer’s disease. His research has provided a new way for researchers to study a specific type of immune cell, known as microglia, in the lab.

Both Dr Bradley and Prof Mancuso will present their research to over 500 fellow dementia scientists at the Alzheimer’s Research UK Research Conference 2021.

Thanks to our amazing supporters and their incredible fundraising efforts in the last year, we have also been able to award six new Alzheimer’s Research UK fellowships. This funding will support a new generation of dementia researchers as they aim to establish their own careers and explore new questions in dementia research.

As well as providing funding for researchers at the start of their careers, 2021 has seen the return of our dedicated Early Career Researcher Day to kick off our annual research conference. The day aims to bring scientists together to share their research and give them the opportunity to learn valuable skills for their future careers.

As with many aspects of life this year, our 2021 research conference is fully virtual, but we’ve worked hard to build a platform that allows our scientists to connect and learn from each other. Our 2021 Early Career Researcher Day started with a keynote speech from Dr Ozama Ismail, with a reminder that many things contribute to a happy career! 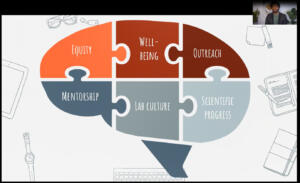 Dr Ozama Ismail reminds researchers that lots of things come together to make a well-rounded scientist!

The day also saw six PhD students present their work to their peers, giving them a chance to discuss their results and spark new ideas. It is always inspiring to see students who are passionate about their research, talk about cutting edge dementia science.

As well as talks from PhD students, the Early Career Researcher Day also gave scientists a chance to learn new skills like making their own Zine or using storytelling to better talk about their research. The day also gives those at the very early part of their careers an opportunity to hear from people further down the line and pick up some hints and tips for their scientific journey!

A selection of talks and workshops from our Early Career Researcher Day!

Protecting the future of dementia research

COVID-19 is having a catastrophic impact on people with dementia. Thousands of people have seen their condition deteriorate amid social isolation, families have been unable to visit their loved ones in care homes, and a quarter of the people who have died with COVID-19 in England and Wales (nearly a third in Scotland) also had dementia.

At the same time, dementia research is not immune to the effects of the pandemic and is facing a devastating fall in funding. Alzheimer’s Research UK recently carried out a survey of UK-based dementia researchers, which revealed that 95% have had their projects delayed and one in five have had theirs stopped completely. The survey also revealed that:

A lack of future funding opportunities is forcing many scientists to consider leaving the field and we risk losing the next generation of dementia researchers unless we can support them and their ideas. Losing these scientists would mean not only a loss of resource to continue vital studies, but a loss of valuable expertise.

That is why we are calling on the Government to keep their election promise to double funding for dementia research. You can help us by signing our petition and get us to 50,000 signatures.