A record year, thanks to you

Each year as we finalise our Annual Report, I find myself reflecting on how far we’ve come.

When the charity was established back in 1992 as the Alzheimer’s Research Trust, our founding trustees and scientists set out to fund a dedicated dementia research centre in Cambridge in response to a shocking lack of investment in the sector. 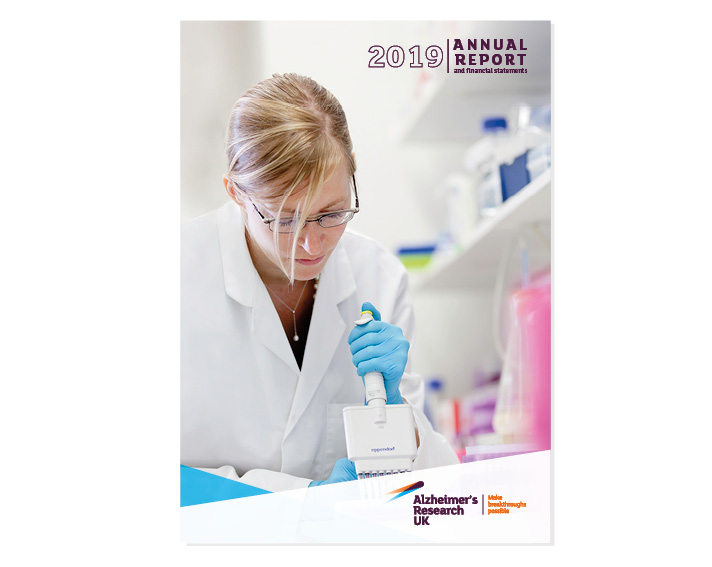 Today, our Research Network links 15 centres of excellence and more than 2,000 researchers from across the UK. There are 21 drug discovery projects underway at our Drug Discovery Institutes in Oxford, Cambridge and London. And our landmark investment in the UK Dementia Research Institute – £50m over ten years – is helping to bring together 700 world leading scientists to answer the biggest questions in dementia research.

We can be proud of the progress made, and it’s all thanks to you.

More research funded than ever before

Our 2019 Annual Report, published this morning, reveals that income from voluntary donations reached a record £36.7m during the year – a clear signal that public support for dementia research is stronger than ever. This enabled us to commit a record £25m to our charitable activities, of which £19.8m was invested in pioneering research programmes.

Your support has enabled our scientists to make more than 200 important discoveries during the year. They published the biggest ever map of a human brain with Alzheimer’s, identified an innovative new drug delivery technique and launched a phase II clinical trial to test whether a medicine called Sativex® could help reduce agitation for people with dementia.

But we don’t just fund research. Last year, our Dementia Attitudes Monitor, revealed that although more than half of UK adults know someone who has been diagnosed with dementia, one in five still believe that it’s an inevitable part of getting older.

So confronting misconceptions across society remains as important as ever.

That’s why in 2018/19, we launched Make Breakthroughs Possible; our most ambitious awareness campaign yet. It’s why we joined forces with Alzheimer’s Society to deliver the Dementia Revolution, using the Virgin Money London Marathon to tell the stories of those personally affected by dementia. And it’s why we stepped up our activity to engage hard-to-reach groups, working with South Asian communities to encourage people to talk openly about dementia.

We are pressing ahead with our work towards bringing about the first life-changing treatment for dementia, and I hope that the achievements detailed in this report fill you with the same optimism and belief that drives all of us at Alzheimer’s Research UK.

To read the full 2019 Annual Report, or the shorter Annual Review which summarises progress made during the year, please visit alzres.uk/annual-reports.