Alzheimer’s Research UK is proud to have the support of the former Prime Minister, The Rt Hon David Cameron, as our President

Mr Cameron joined Alzheimer’s Research UK as our President in January 2017. As our foremost Ambassador, Mr Cameron is committed to championing the need for research to help us achieve our goal of bringing about life-changing treatments for dementia. 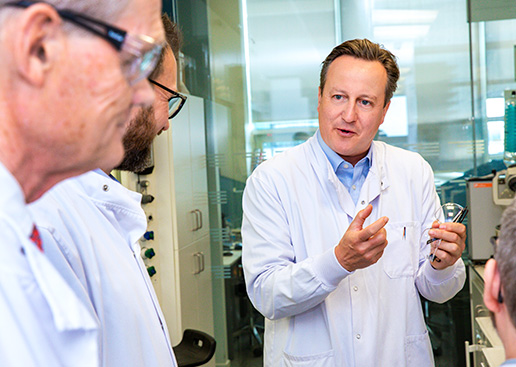 Since becoming our President in 2017, Mr Cameron has been working closely with our staff, undertaking speaking engagements around the world, visiting some of our pioneering labs, and meeting supporters, fundraisers and people affected by dementia.

Mr Cameron has undertaken a number of fundraising events and individual meetings with philanthropists in his role as President on behalf of the charity. Individual donations and corporate fundraising inspired by these activities has raised many millions of pounds for our research over the past two years, as well as opening up new strategic research partnerships and collaborations.

To recognise extraordinary contributions and galvanise the support of future philanthropic supporters, we launched our prestigious Pioneers’ Circle under the leadership of our President last year (2018). The Pioneers’ Circle now has over 20 members.

Mr Cameron has also met with heads of biotech, data and biomedical research companies and funders in the UK and US to champion our work to improve the early detection of diseases like Alzheimer’s.

His programme of activities continues to develop as he helps to build on Alzheimer’s Research UK’s position as one the fastest growing medical research charities in the country.

The President of Alzheimer’s Research UK is an unpaid voluntary position and we are very grateful to Mr Cameron for his support.

Mr Cameron’s commitment to dementia while in office as Prime Minister made huge strides in raising awareness of dementia and delivering much needed funding for research. We are delighted he is continuing his personal mission against dementia as President of Alzheimer’s Research UK.

Mr Cameron comes to the role with a strong legacy around dementia research. In 2012, as Prime Minister, he launched the Dementia Challenge – an unprecedented programme of action to deliver sustained improvements in health and care, create dementia friendly communities, and boost dementia research. Writing at the time, Mr Cameron said that “dementia is one of the biggest challenges we face today – and it is one that we as a society simply cannot afford to ignore any longer.”

Following this, in 2015 he published the Prime Minister’s Challenge on Dementia 2020 to build on the Government’s work and set clear and ambitious goals for the coming years, including to deliver a disease-modifying treatment for dementia by 2025. Alzheimer’s Research UK fully supported these goals and remains at the forefront of global efforts to deliver new treatments, working closely with Mr Cameron to deliver our strategy.

Our voluntary Board of Trustees meets five times per year, with executive staff present.

With expertise in research, fundraising, policy and more, our staff and key spokespeople are dedicated to making breakthroughs possible.